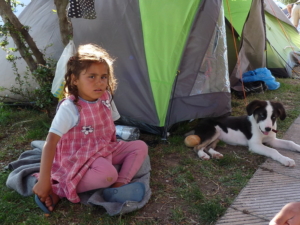 Wars, persecution and horrific conditions caused by extreme poverty created 36 million refugees around the world. 24 million of these refugees come from just 5 countries: Syria, Venezuela, Afghanistan, South Sudan, and Myanmar. Here’s a look into the five largest refugee crises of our time.

Syria has 5.6 million refugees and is among the largest and most well-known refugee crises today. When the government cracked down on peaceful student protests, the Syrian Civil War started March 15, 2011 and has now killed 500,000 people.  Bombing infrastructure destroys living conditions resulting in 6 million people being displaced. With 70% of Syrians living in extreme poverty, nearly 11 million Syrians need humanitarian aid. Due to conflict, aid groups are struggling to access the areas that need assistance.

Venezuelan refugees number 3.7 million. In 2014, oil prices fell and created an economic collapse. The current inflation rate of 15,000%  has pushed 14 million Venezuelans to live in extreme poverty on less than $1.90 a day. Shortages of food, water, and medicine constantly threaten the health of Venezuelans. Hyperinflation and lack of resources drive refugees from this crisis into bordering countries such as Columbia.

Columbia hosts the second most refugees in the world with 1.8 million Venezuelan refugees. The Columbian government is working to include Venezuelan refugees economically by providing Special Stay Permits that allow more than 100,000 refugees to earn a living working in the country.

Forty years of conflict following the Soviet invasion in 1979 created 2.7 million refugees from Afghanistan. Political uncertainty and conflict have led to 2 million people being displaced in Afghanistan. Natural disasters and attacks on aid workers prevent those displaced from receiving much-needed support. Pakistan and Iran host most of these refugees.

With one out of every ten refugees being from Afghanistan, this crisis needs immediate attention. Pakistan hosts 1.4 million Afghan refugees and is working with the UN to provide more schooling opportunities. However, if conditions improve in Afghanistan, it is possible that 60,000 refugees could return to Afghanistan.

Around 2.2 million refugees are from South Sudan. South Sudan is the youngest nation in the world after becoming independent from Sudan in 2011. In 2013, a civil war broke out causing 383,000 deaths due to violence and hunger. Meanwhile, 4 million people became displaced from their homes. Food insecurity caused by famines and war has left 5.5 million people hungry.  Malnourishment greatly affects the development of children, who make up 63% of this refugee population. This is the largest refugee crisis in Africa, with most refugees fleeing to Ethiopia and Uganda.

Uganda hosts 1.7 million refugees and works to integrate them into society by providing them with land.
Currently, there is a mental health crisis among refugees. Suicides are on the rise, and COVID-19 puts an even bigger strain on the health of South Sudanese refugees. If Uganda gains more funding, it can improve the mental health of refugees by providing more support. Uganda’s progressive approach to refugees can help South Sudanese refugees start a new life.

The Rohingya Crisis has created 1.1 million refugees from Myanmar. Myanmar is a Buddhist country, but the Rohingya Muslims are a minority group. The Myanmar government refuses to recognize the Rohingya people as citizens, therefore they are a stateless people. In 2017 the Myanmar army burned up to 288 Rohingya villages and carried out mass killings.  To escape persecution, over 700,000 people have fled to Bangladesh and now stay in the largest refugee camp in the world: Cox’s Bazar. In 2020 the United Nations International Court of Justice has called for an end to the violence against the Rohingya and for the government to recognize the Rohingya as citizens.

Conflict and poverty are creating refugees in 2020. Most refugees originate from Syria, but Venezuela’s numbers are beginning to rise to the same level. Host countries need to continue to reform government laws to include refugees in their communities. Millions of people, both refugees and host countries, are globally affected by the current refugee crises.