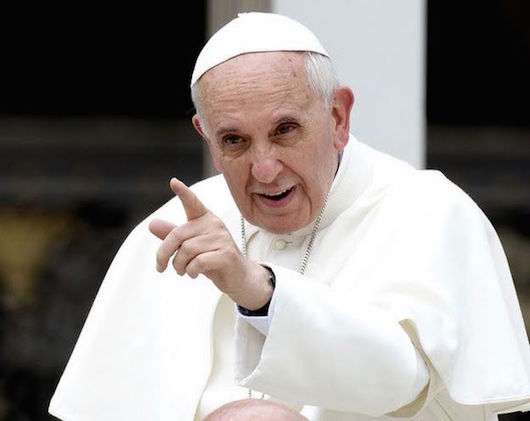 Every year, the World Economic Forum (WEF) gathers the global business, political and academic elite in Davos, Switzerland to tackle the planet’s toughest issues. This year, Pope Francis was once again invited to address the group and his message was clear: fight inequality.

A cardinal from the Vatican read the Pope’s letter to forum members on Jan. 22. It began by thanking the WEF for their invitation but quickly addressed global poverty and inequality: “The financialization and technologization of national and global economies have produced far-reaching changes in the field of labor. Diminished opportunities for useful and dignified employment, combined with a reduction in social security, are causing a disturbing rise in inequality and poverty in different countries.”

The recently published Oxfam report, “An Economy For the 1%,” corroborates the Pope’s views. Increasingly fewer people control more of the world’s wealth. From 1988 to 2011, for example, 46 percent of the global increase in income went to the wealthiest 10 percent of the world’s population.

Pope Francis’s address emphasized that caring for the poor means more than empathizing with their plight. “Weeping for other people’s pain does not only mean sharing in their sufferings, but also and above all realizing that our own actions are a cause of injustice and inequality.” He called on business leaders to create an inclusive future and warned about the “Fourth Industrial Revolution” that is hindering progress to fight inequality.

The “Fourth Industrial Revolution” refers to the coming age of robotics and artificial intelligence in everyday life. On its website, the WEF explains that while this revolution will raise global income levels, it may exacerbate inequality. The Pope wishes that this transformation of society “does not lead to the destruction of the human person – to be replaced by a soulless machine – or to the transformation of our planet into an empty garden for the enjoyment of a chosen few.”

Along with this warning, Pope Francis stressed that the age of robotics also presents an opportunity. With vastly increased productivity, humans will have more resources available for “our common home.” He emphasized that business is “a noble vocation” with the ability to improve others’ lives by providing them with a living wage and meaningful work.

His message is that, besides increasing profit and productivity, business leaders must not forget their duty to create jobs. Through the creation of jobs that pay a living wage, the economic elite lift people out of poverty and provide stability for the many living precarious lives. In the drive for modernization, Pope Francis tells leaders, “Do not forget the poor!”

Since becoming Pope, he has uniquely focused on ending inequality. In his 2016 address to Davos, he urged the global elite to work with that goal in mind. The most powerful people on earth, after all, are the most powerful agents for change.

As for what he recommends, Pope Francis’ words speak for themselves. From his 2014 apostolic exhortation: “Growth in justice requires more than economic growth: it requires decisions, programs, mechanisms and processes specifically geared to a better distribution of income, the creation of sources of employment and an integral promotion of the poor which goes beyond a simple welfare mentality.” Careful planning and action are needed to fight inequality.