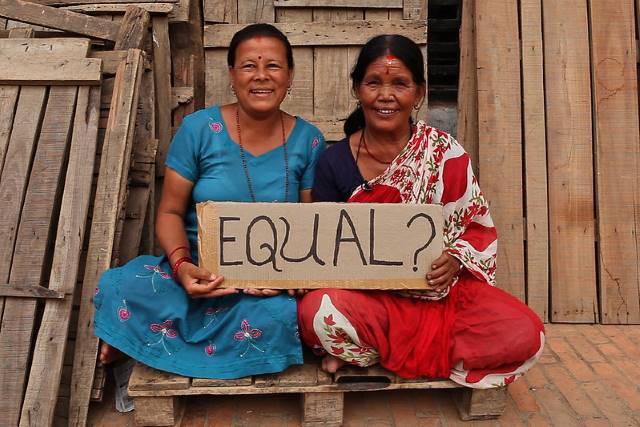 Patriarchal values have long dominated Nepali culture. Prevailing attitudes have led to the belief that women in Nepal are inferior to men. As a result, Nepal has long suffered from high gender inequality, which has hampered the country’s overall development. Deeply entrenched views regarding the role of women in society have held back government initiatives, causing progress to be slow. Nari Bikash Sangh, a Nepali NGO, hopes to address gender inequality by directly aiding women in Nepal.

The Status of Women in Nepal

While women’s rights in Nepal have improved over the years, women still face many obstacles in their daily lives. Social values dictate a woman’s every move and women’s needs are often subservient to men’s needs. As a result, most social indicators for women lag behind those of men. The most striking example is Nepal’s literacy rate. As of 2011, the literacy rate for women was 44.5% compared to 71.6% for men, showing the vast disparity between the two genders. This disparity in literacy rates displays the challenges that Nepali women face in achieving upward social mobility as illiteracy inhibits one’s ability to acquire an education and eventually obtain gainful employment.

The patriarchal values that dominate Nepal can explain the disparities in social indicators between men and women in the country. These values mean a woman’s actions and wishes are often subject to the whims of the men in her life. For example, women are often discouraged from pursuing higher education or traveling abroad because of the idea that a woman’s role is to be a homemaker and caregiver.

Several initiatives have been developed with the aim of promoting women’s rights in Nepal. Nari Bikash Sangh (NBS) was founded in 1980 as an NGO whose goal is to help rural, disadvantaged women in Nepal become empowered and aware of their civil rights. With 89 paid staff and more than 2,200 volunteers, NBS reaches more than 100,000 women in Nepal.

Partnering with World Literacy of Canada, NBS started the Women Empowerment Project in 1999. The objective of the program is to encourage the social and economic empowerment of women from certain disadvantaged communities who have been unable to access formal education and employment opportunities. The project raises awareness about violence against women and also provides information on tools and services for victims of violence. Furthermore, this project includes a program to teach marginalized women vocational skills and how to generate income.

The Road to Gender Equality

Nepal’s deeply entrenched patriarchal values have necessitated a response from ordinary Nepali citizens to ensure gender equality. Nari Bikash Sangh is an example of an organization that seeks to do just that. By raising awareness of women’s rights and initiating self-sufficiency programs, NBS is aiding women in Nepal in a crucial way.