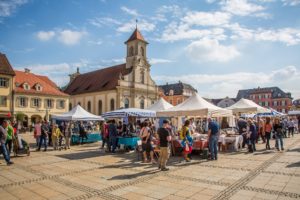 Despite being a necessary precaution to avoiding life-threatening reactions, managing food allergies is still considerably more difficult for low-income families, according to researchers at the University of Waterloo. Although much progress has been made to increase awareness of food allergies, in Germany in particular, the high costs of allergen-free food products and medications leave Germany’s poor disproportionately affected by allergen-free food inaccessibility. With increases in both food sensitivities and poverty rates in recent years, Germany might encounter a growing issue of food inaccessibility — and it may not be the only country to do so.

Prevalence of Food Allergies in Germany

Globally, the prevalence of food allergies has been rising steadily over the past few decades, affecting nearly 10% of children in Australia and 2% of adults throughout Europe.

In Germany, a study conducted by the Environmental Medicine Commission of the Robert Koch Institute (RKI) places the prevalence of food allergies in adults at 4.7%. While researchers note that there have been relatively no changes to the doctor-diagnosed prevalence of food allergies in Germany over the past 15 years, food sensitivities in Germany still remain higher than in most other European countries. Approximately 25.5% of adults were “sensitized” to at least one food in the RKI study, meaning that researchers detected IgE antibodies specific to at least one food allergen in their blood. That compares to a food sensitivity prevalence of only 11% of Spain’s population and 14% of the U.K.’s population.

Although researchers previously observed a greater prevalence of allergies in urban areas, research in Bavaria found that rural areas aren’t excluded from the allergy “epidemic” either. While several studies have associated living on farms with a decreased risk of food allergies in Germany, other research notes an increased prevalence of allergies (37.3%) in the Bavarian countryside as compared to the German national average (20.0%).

The Cost of Allergies

Such data suggests an increased demand for allergen-free foods in rural communities—a hard ask considering the disproportionate distribution of supermarkets. Although supermarkets and discounters are widely accessible by car throughout Germany, by foot their accessibility is considerably poorer in rural areas, especially for less mobile groups like the elderly.

Even if there are supermarkets nearby, however, that doesn’t mean they shelve allergen-free products. Despite the prevalence of food allergies in Germany, allergen-free food products are still considerably more expensive than their mainstream counterparts ($4.50 for a loaf of gluten-free bread compared to $2.50 for a whole grain loaf in the U.K.). The high costs of purchasing ingredient substitutes, preventing cross-contamination and ensuring compliance with strict government regulations contribute to these costs, according to BBC.

Like allergen-free food products, potentially life-saving diagnostics and medications remain a large expense for those with food allergies in Germany and across Europe. Between hospital visits, allergy treatments and travel costs, researchers at the University of Finland concluded that families with a child between 1-2 years of age spend an average of $3,600 on managing their child’s food allergy.

As a result of the increasing demand of allergen-free products (a robust 20% increase over the past 12 months in the case of EHL Ingredients), German food manufacturers are accelerating production of their “free-from” lines. In 2008, for example, only 6.4% of dairy products were lactose-free; by 2013, that number had nearly doubled to 12.1%.

However, nonprofits aren’t simply waiting for the increased demand for allergen-free foods to take down towering prices. Many, like the German Celiac Society (DZG), are also actively intervening to ensure accessibility to gluten-free foods for those with food allergies in Germany.

“Gluten-free food in Germany tend to be twice as expensive as gluten-containing food,” says Michael Mikolajczak, the DZG’s press office representative. “The DZG is talking to politicians about tax-free allowance for people with celiac disease in order to achieve financial compensation.”

Although Larissa Nitz, member of the DZG’s youth committee, said that such tax relief initiatives never were quite successful, both she and Mikolajczak point towards Germany’s strong welfare system as a source of financial assistance for those managing food allergies in Germany.

When it comes to supermarket accessibility, the norm of “buying local” combined with the high prevalence of food banks makes the long distance to supermarkets a less acute issue for those with food allergies in Germany. In fact, according to a 2015 paper examining the German food bank system, only 6.69% of all residents and 5.75% of all welfare recipients lacked access to at least one food bank in their district.

While the researchers did not examine whether these food banks offer allergen-free food products, they did mention that a majority of food donations (82.29%) were supplied by regular donors, most notably retailers. According to Nitz, this may be a reason for hope. As manufacturers of allergen-free food products experience heightened demand, their increased supply of products might allow them to lower prices, and perhaps even contribute more frequently to food bank donations. Food banks, in turn, might be able to contribute more frequently to schools, where the availability of gluten-free food options is oftentimes widely variable.

“In terms of lunch at universities and in-office canteens for those youths who already work, the experiences are very different,” said Nitz. “A concrete initiative we have as the youth committee, is that we on a yearly basis request the possibility of gluten-free breakfast, lunch and dinner as well as features like an exclusive toaster for gluten-free use only from German youth hostels.”

National health insurance and increased allergy awareness have helped ensure more equitable access to treatments. Physician knowledge of food allergies in Germany is continuously enhanced by the research-based training of the Comprehensive Allergy Center Charite (CACC) in Berlin. The cost of doctor’s visits, on the other hand, are eased by the universal health insurance provided under German’s statutory healthcare system, to which 85% of Germany’s population have access as of 2014.

Allergen-free food accessibility has improved in accordance with increases in food allergies in Germany, as well as poverty rates. Allergy medications and allergen-free food products remain expensive. However, increased product demand combined with food banks and a national healthcare plan all point towards progress in the fight for global food security.