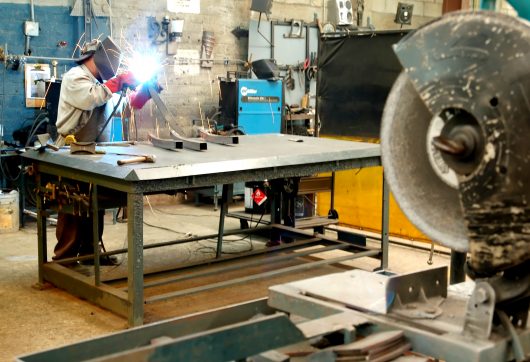 The second round of NAFTA renegotiations closed Sept. 5 with major disagreements between the three countries left unresolved. The A.F.L.-C.I.O. has pushed U.S. negotiators to introduce a provision guaranteeing a living wage for all workers in the U.S., Canada and Mexico. A higher minimum wage in Mexico would greatly impact the country’s businesses that profit from the cheap labor supply.

Mexican political and corporate leaders support a low minimum wage as a way to encourage businesses to move operations into the country. Corporations located in Mexico can keep production costs low by utilizing the country’s cheap labor supply. These businesses can then undercut their competitors on foreign markets.

Mexico’s automobile industry is the main source of the country’s trade surplus with the U.S. Mexican auto workers earn, on average, $6 an hour while U.S. auto workers earn $28 an hour. Closing the wage gap between the two countries would make U.S. automobile manufacturers more competitive in the international market.

In addition to a higher minimum wage in Mexico, the U.S. is also likely to push for worker protections like the right to unionize and strike. Mexico has some worker protection laws in place, but existing policies are loosely enforced. Workers who push for higher wages or improved conditions by participating in strikes are usually fired. Existing labor unions are ineffective negotiators because leaders are often chosen by political officials through rigged elections.

Opponents to new labor laws fear that rising wages will halt economic development as businesses leave for countries with cheaper labor. They argue that Mexico’s competitive advantage over the U.S. and Canada will disappear naturally as the country undergoes economic growth.

Despite Mexican officials’ resistance, the U.S. remains focused on including better worker standards in the trade pact’s renegotiation. The proposed policy has the potential to significantly improve the standard of living for the average Mexican citizen.