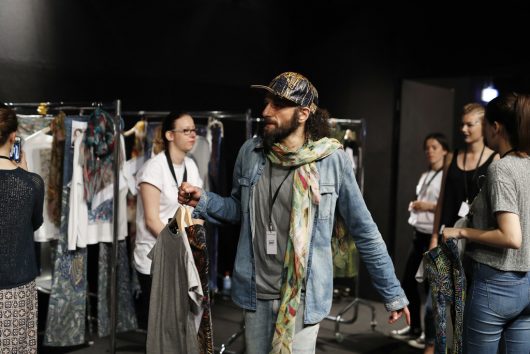 Jeans for Refugees is a project that raises funds and awareness about the needs of refugees around the world. Artist Johny Dar wants refugees to know that the world can mobilize in different ways to help them and that they will not be forgotten.

“Ever seen the news and felt helpless, sad or angry about why things are the way they are? You are not alone!” says the Jeans for Refugees website. “And our mission is to make sure that neither are the millions of refugees who are homeless, hungry and suffering the effects of war and destruction.”

Actors, artists, models, singers and songwriters have donated jeans that Dar will paint and sell in an auction at the end of October. The proceeds will be donated to International Rescue Committee (IRC) projects that provide relief to millions affected by the global refugee crisis.

Alicia Vikander, Benicio del Toro, Bryan Adams, Daniel Radcliffe, Emma Watson and Ryan Gosling are some of the celebrities involved in the project. Dar paints each pair of jeans to reflect the personality of the celebrity who donated them. Dar told Vogue News that celebrities do not need convincing to donate a pair of their jeans.

“I believe they were convinced the same way that I was convinced myself, and how everyone else became convinced too — this is a humanitarian cause that is much grander than me and everyone involved in it,” said Dar.

Platoon Cultural Development claims Dar is a renaissance man, whose name is big in fashion, textiles, body art, painting and many other artistic fields.

Having Dar’s signature on the Jeans for Refugees movement places the humanitarian cause at the forefront of popular modern art and in the sights of the millions involved in the art community.

The enthusiastic response from celebrities shows how individuals with influence are eager to support a worthy cause. The hope is that others will follow these celebrities’ examples and react as quickly when given the opportunity to help those in need.

Dar’s art has the potential to be a major awareness-raising tool as it reminds people that every life deserves a chance.