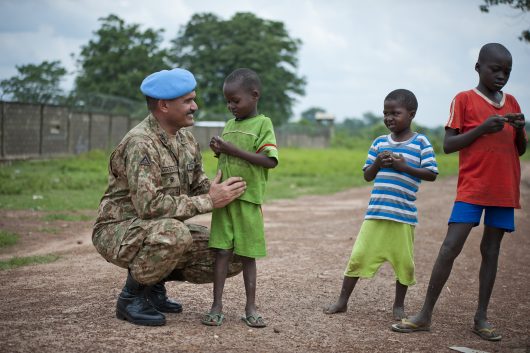 Between 2005 and 2009, despite the decades of conflict that have riddled the Central African Republic, the total contribution to the country’s per capita growth by telecommunications, electricity and road infrastructure was 0.9 percentage points. Though this was significantly lower than other central African countries, the study made it clear that infrastructure development in the sub-Saharan context led to faster growth per capita in several countries.

This strong potential is also beset by a dire reality: the central African region has the worst infrastructure on the African continent. According to a report by the African Development Bank (AfDB), the “region stands out on the continent as one with the least infrastructure network, particularly transport and energy, which impacts negatively on production capacities and regional trade as well as social conditions and welfare.”

Infrastructure in the Central African Republic, in particular, is in a very poor state. For instance, only 10 percent of the population — mainly in the capital of Bangui — has access to electricity, which is not available to the rural population.

Other services like telecommunication and banking are either lacking or nonexistent beyond Bangui. Corruption within the government not only fuels instability but also hinders developmental and growth efforts in the country as natural resources like diamond and gold are exploited within the inertia of instability.

Despite the many challenges, transport, water, power, and information and communications technology infrastructure in the Central African Republic have seen significant progress with $134 million in annual spending, $37 million of which is lost to inefficiencies.

The World Bank has estimated that a sustained expenditure of $346 million per year over the next decade can address the challenges that remain. Just by improving efficiency in infrastructure operations, around $34 million of additional resources can be unlocked.

Alternatives to the government’s poor budgetary situation have also been proposed, including extending the time horizon for meeting the infrastructure targets, prioritizing infrastructure spending and exploring additional resources from outside the budget. These are all ways infrastructure in the Central African Republic can be improved.

2017 saw some economic recovery in the Central African Republic, with GDP growth estimated to be around 4.5 percent, which fell short of the projected 5.3 percent. In 2018-19, the AfDB foresees a rise in average annual growth to 5 percent or higher. This growth “will hinge on improved domestic security, which is crucial to agricultural recovery and implementation of investment plans and economic reforms supported by international partners.”