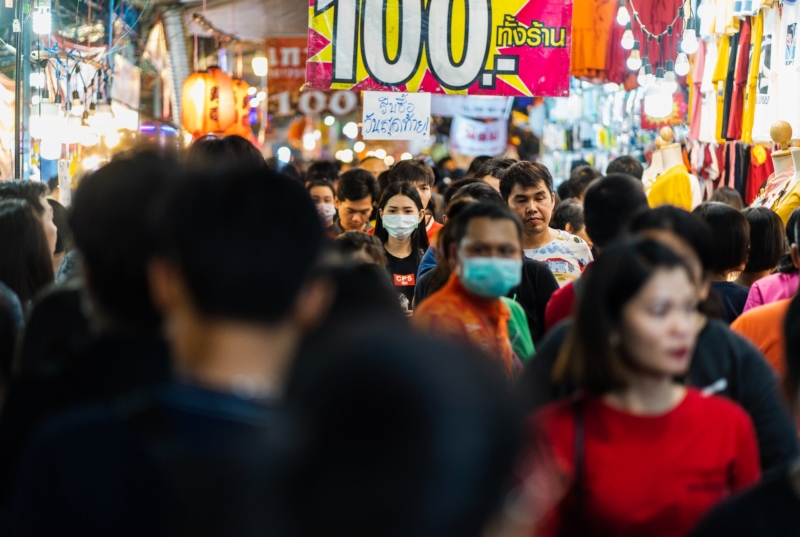 COVID-19 and the economic consequences of its spread have caused greater levels of poverty in Thailand since 2020. Reports determined that the COVID-19 pandemic plunged almost 800,000 people into poverty in 2020. The impact of COVID-19 on poverty in Thailand has primarily manifested as a spike in unemployment. By spring of 2021, Thailand’s job market had 710,000 fewer jobs compared to the previous year. The pandemic also adversely affected tourism flow to the nation, which accounts for about a fifth of GDP and 20% of employment. Thailand’s economy and poverty levels have not experienced such a negative impact since the Asian Financial Crisis of 1997.

The government’s initiative, however, in responding to this crisis has somewhat curbed the pandemic’s potential for further devastation. Authorities were quick to introduce quarantine measures that were effective in containing the virus during most of 2020. Though several waves of infections have exacerbated the impact of COVID-19 on poverty in Thailand, the policy packages were effective in creating fiscal stimulus.

The support ranged from financial assistance for debtors to health-related spending for affected households, including those outside the social security system. Simulations suggest that more than 780,000 additional people could have fallen into poverty in 2020 if the government had not bolstered social support.

Thailand’s efficient response to the pandemic is impressive, but not surprising. Since 1988, the country has reduced its poverty levels from 65.2% to 6.2% in 2019, according to the World Bank. Its most effective initiative was to scale up cash transfer programs such that it became one of the largest scale fiscal responses to COVID-19 in the world.

“The crisis in 2020 demonstrated Thailand’s ability to leverage its robust and universal digital ID, sophisticated and interoperable digital platform and a number of administrative databases to filter eligibility for new cash transfer programs,” said Francesca Lamanna, the Senior Economist at the World Bank.

The Current Status of Poverty Levels in Thailand

While the government has responded relatively well, the country continues to struggle as it enters the fourth wave of COVID-19. The official unemployment rate was 2% in the first quarter of 2021 due to COVID-19, with the loss of jobs most concentrated in the services sector. On the one hand, slow vaccination rollout and widespread doubt seem to be stalling recovery. On the other, some infected individuals living below the poverty line may go so far as to violate quarantine rules in order to continue earning much-needed income.

The impact of COVID-19 on poverty in Thailand and its economic dependence on contact-intensive sectors means the continuing waves of infection prolong unemployment, with financially vulnerable groups bearing a disproportionate burden of economic insecurity.

In response to these conditions, the number of volunteers in Thailand has also been surging. Bangkok Community Help is one such organization. It has grown to more than 400 participants since its founding early in the pandemic in 2020. Greg Lange and Friso Poldervaart are two restaurant owners that spearheaded the community initiative after neighbors approached them to inquire if they could use their empty restaurant kitchens to prepare hot meals.

While the scale has transformed considerably, Bangkok Community Help’s main objective remains to assist vulnerable sections of Bangkok through volunteer and donation initiatives. “After [last April and May], we decided to focus more on more long-term projects, like building houses for people, turning a garbage dump into a park, and teaching kids,” Lange and Poldervaart told TimeOut.

Donations vary in scale and source. Individuals may hand out meals they prepared themselves to hungry construction workers, while foreign aid initiatives fund larger-scale operations such as survival packages of preserved goods. Australian Aid paid for rice recently distributed outside of Bangkok’s main port facilities through the Australian Government Aid Program. The program provides small grants in support of local, non-governmental organizations in Thailand.

The New Zealand – Thai Chamber of Commerce, an organization dedicated to promoting commerce between Thailand and New Zealand, donated apples. These organizations have even employed volunteers to bring oxygen tanks to the homes of the infected when hospitals were overcrowded, in the hopes of keeping them alive until a hospital bed becomes available. Bangkok Community Help continues to inspire individual and government action through its aid, opening aid centers and converting unused schools and auditoriums into treatment centers.

Looking towards the future of COVID-19’s impact on poverty in Thailand, there are different projections. The devastation of the pandemic is a large-scale issue that called for radical measures, but the methods of mitigation employed may be useful in shifting political focus towards strengthening social support systems in the future. These circumstances have the potential to catalyze an economic reform in Thailand, such that its industries can become more digital.

According to the International Monetary Fund (IMF), the authorities see this as an opportunity to transform tourism from low-cost, high-density travel, to high-end, low-density travel. This would allow for other domestic industries to flourish without wreaking havoc on the country’s economy. It may also be more ecologically friendly, offering greater protection of natural resources on which the tourism industry is dependent. All of these factors have the potential to gradually reduce the number of people living below the poverty line, by strengthening Thailand’s social and fiscal fiber.