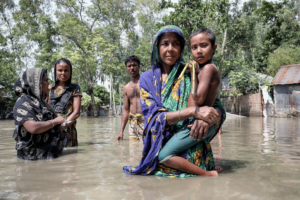 Bangladesh, along with many other South Asian countries, is prone to flooding and increasing rainfall. For years, Bangladesh has suffered from one of the harshest torrential rains in the world. However, this year the country has experienced the worst of its effects. These torrential rainfalls lead to flooding in Bangladesh and this, in turn, has an adverse effect on poverty levels.

In many cases, monsoon season in Bangladesh typically starts in June and can last for months, as situations worsen. According to satellite data, at least 24% of the land in Bangladesh lies submerged underwater, due to the rapid inundations. This environmental crisis affects at least 4.7 million people and most of them lose their houses and utilities. Specifically, people living along the Brahmaputra river are deprived of basic human necessities, such as food and shelter. This is because of the increased flooding this year, alone. For example, Tajul Isam, a local sharecropper, had to find creative ways to protect himself from the overflows of the Brahmaputra River, such as building bamboo sheds.

Many officials claim the source of the floods is a result of the rampant rainfalls this past year. Through the analysis from a combination of satellites, many scientists also predict that Bangladesh will experience its longest flooding season since 1988. Again, this due to the recent, recurrent rainfalls. More than 1,200 kilometers of farmland is damaged, along with approximately 1.5 million houses affected. At least 100 people have died, either from waterborne diseases or drowning from the overflow of rivers, such as the Himalayas river and the Brahmaputra river. Fifteen districts are predicted to be affected by the rising water levels from other rivers — specifically the Padma, Ganges and Jamuna rivers.

Response to One of the Worst Monsoon Seasons in Bangladesh

Bangladesh and many others are initiating protocols in providing disaster relief funds and resources for the areas most affected by the monsoon season. The Humanitarian Coordination Task Team (HCCT) strategized plans to rehabilitate some of these damaged lands and provide people with resources. For example, they are currently transporting 14,000 tons of rice to over 33 districts. Additionally, they are giving over $870,000 for expenditures such as food, farming equipment and housing grants. Along with the expenditures — 50,000 farmers will receive $450,000 for tools such as fertilizers and seeds to compensate for their damaged farmland.

On top of the HCTT Response Plan, many other organizations are also taking charge to help victims of the flooding in Bangladesh. For example, the Need Assessment Working Group (NAWP) and the Department of Disaster Management (DDM) have provided at least 1,086 flood shelters to families. Specifically, these shelters went to those who lost their homes in the district of Jamalpur. Overall, however, the Start Fund Bangladesh — with the help of USAID and U.K. support — raised over $1 million to provide disaster relief in districts such as Kurigram, Gaibandha and Siraganji.

Although the government has issued many responses, smaller projects have also pursued action towards the recovery of damaged areas in Bangladesh. In particular, Friendship Organization has provided services and resources in impoverished areas— one of which is Bangladesh. As of now, they have had over 400 volunteers and 200 staff members assist in the emergency response for the monsoon season in Bangladesh. Additionally, flood shelters were provided for over 8,800 people through Friendship’s built schools and villages.

Bangladesh has suffered through much environmental damage due to its drastic weather conditions. Nonetheless, many actors are pressing forward to ensure the safety of vulnerable communities. With the help of the Bangladeshi government and many NGO projects, Bangladesh will more than likely recover and replenish the resources that it desperately needs.