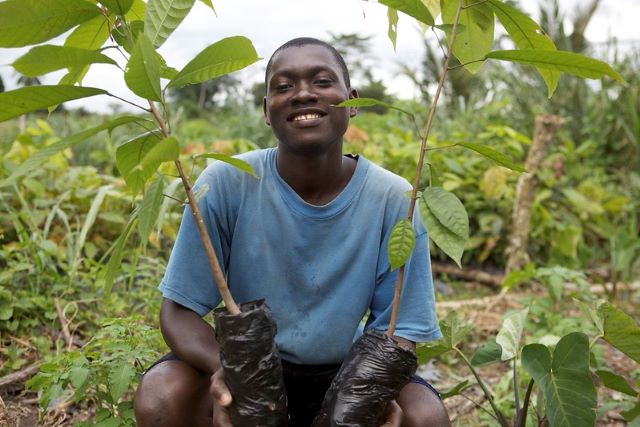 Ghana and Côte d’Ivoire are responsible for collecting around 70% of the world’s supply of cocoa beans and the industry as a whole is worth over $100 billion. However, despite the economic importance of cocoa farming for these nations, there has been controversy surrounding the people doing the farming. A large proportion of those working at these cocoa farms are children, some as young as 5 years old. These children are subjected to health and safety hazards in the form of unsafe pesticides and dangerous tools. They are also exploited and paid less than adults doing the same job. Additionally, this practice pulls children away from possible education. In a broad sense, this issue of child labor in cocoa production has gone unsolved and ignored by the governments of Ghana and Côte d’Ivoire as well as the companies profiting off of the work. The World Cocoa Foundation has asserted its commitment to ending child labor in cocoa production.

According to a recent study done by NORC, the number of children working in cocoa farms has not been improving and could possibly have increased in the past few years. It found that nearly 45% of children living in agricultural homes of Ghana and Côte d’Ivoire work in cocoa production. This adds up to about  1.5 million children. The same study found that in the last decade, the proportion of child labor in cocoa production has increased from 31% to 45%. As the cocoa industry continues to rapidly grow, there are no signs that child labor will decrease unless there is immediate and substantial intervention.

Past attempts to eradicate child labor in cocoa production have been poorly implemented. In 2001, a number of the largest producers of African cocoa agreed to end 70% of child labor by 2020. Significant progress toward this goal has not been achieved. A similar pledge was made in 2010 but has seen the same shortcomings. When asked of past failures in these areas, the president of the World Cocoa Foundation, Richard Scobey, said that targets were set “without fully understanding the complexity and scale” of issues of poverty and child labor in these African countries. With studies by the NORC and other groups, it seems as though the issues are better understood now than they were in past decades.

Response by the World Cocoa Foundation

The World Cocoa Foundation has also announced other efforts to combat child labor that include efforts from companies, the governments of Ghana and Côte d’Ivoire and other stakeholders. Firstly, the Living Income Differential pricing policy is expected to provide $1.2 billion in additional revenue for cocoa farmers. For children specifically, the government of Côte d’Ivoire will launch a $120 million pooled funding facility for primary education that aims to reach five million children, with $25 million expected from the cocoa industry. Additionally, to boost household incomes and yields, leading companies will supply training, coaching or farm development plans to local farmers.

Past attempts to end child labor show that the situation in the cocoa industry is severe and complicated and therefore must be prioritized. As the World Cocoa Foundation recommits to ending child labor in cocoa production, collaboration and commitment will serve as important factors for the success of the endeavor.