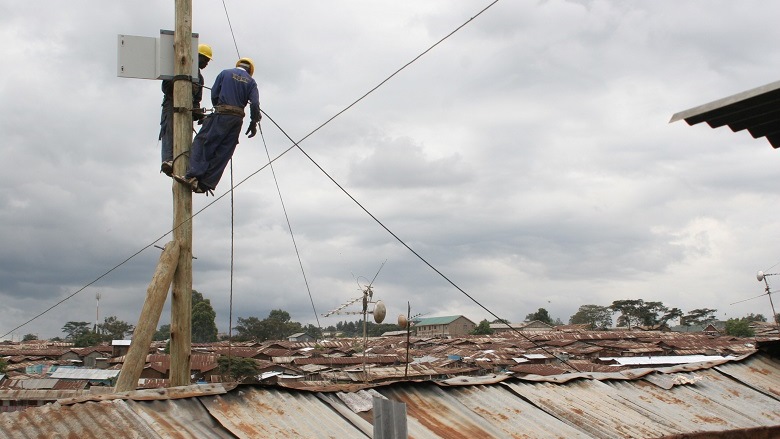 As we stumble into a dark room, it is only natural that our hands reach for the light switch — a motion that takes only a moment before we are bathed in artificial golden rays illuminating the enclosed space in which we stand via electricity.

In our homes and about our daily lives, we do not place a schedule around the daylight hours; with a generous supply of electricity, we can be productive at any time.

We neglect to think about the children who cannot finish their homework each night, the markets which cannot operate in the evenings, the businesses which can’t get off the ground or the schools and clinics which fail to provide the most basic services in areas without electricity, laments a video by the World Bank which describes the harsh reality of living in such circumstances.

When we think of places that have no electricity, often images of remote villages come to mind, but surprisingly, many of those who are lacking access to power are those living in urban slums.

Two years ago in the slums of Nairobi, as many as two million people lived in “informal settlements” which were not equipped with power, or if they were, they were unsafe, unreliable and illegal connections prone to catching fire or causing electrocutions sold by local cartels. This unsafe environment was not desirable and for any change to occur, the Kenyan community would have to embrace the notion of safe and affordable electricity.

At first community members were skeptical of Kenya Power, Kenya’s national utility which focused on taking down illegal connections in the slums from 2011-2013. Community members associated Kenya Power with dismantling their source of electricity, despite how unsafe it may be they were unhappy, often putting up another illegal connection within days.

Kenya Power adapted a community approach and conversed with people, opting to leave the illegal connections alone and just focus on providing safe electricity. In just one year, the number of legal connections would grow from just 5,000 in May 2014 to 150,000 and counting in May 2015.

With the reliability and affordability of such a system in place, its usage has become contagious, “Most consumers use pay-as-you-go scheme, buying pre-paid chits, available at any corner store, and paying for electricity in small increments.

In fact, many of the former vendors of illegal electricity are now in the (legal) business of selling Kenya Power chits,” says the World Bank, which provides funding for Kenya Power and also offers a South-South Knowledge exchange including Kenyan workers and experts from utilities in Brazil, Colombia and South Africa.

Support from the Global Partnership on Output-Based Aid and World Bank’s Energy Sector Management Assistance Program are also a part of the given support and part of a much larger $330 million World Bank project to help Kenya Power expand, modernize and light up its cities’ slums.