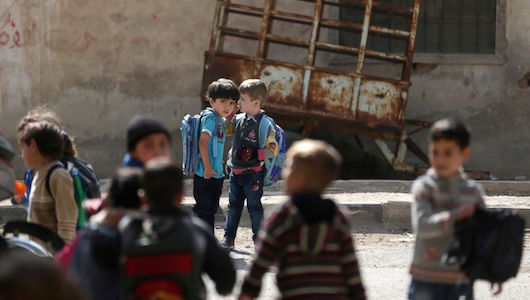 Since last summer, the Islamic State of Iraq and Syria (ISIS) has fought to expand its self-declared Muslim caliphate. Now, many fear that the group’s new schools are irreversibly affecting an entire generation of children.

One of ISIS’s key tactics for expansion is the indoctrination of children to support jihad. In the past year, the group has swept through schools in its conquered territories, changing curriculums to reflect its extreme interpretation of Islam.

When ISIS fighters seized the city of Deir Ezzor in Syria, they closed schools and forced teachers to attend retraining sessions in Islamic education. According to Ahmad, a teacher of 14 years in Deir Ezzor, the training did little to address the problems with Syria’s educational system. Instead, ISIS leaders used these courses to weed out potentially disloyal teachers.

ISIS has imposed strict new rules for students as well as teachers. To complete the required training program, teachers must pledge their allegiance to ISIS leader Abu Bakr al-Baghdadi. Male and female students and teachers are taught in separate classrooms or schools. Girls and women also must wear the niqab, a full-body veil that leaves only the eyes visible. The Hisbah, the ISIS religious police force, monitors schools to make sure teachers and students follow the Islamist guidelines.

Recently, ISIS reopened schools in Deir Ezzor, which for now serve only male students and run for just four hours a day. The schools operate out of volunteers’ houses, not the public buildings previously used as schools. According to Ahmad, schools for girls will reopen when female teachers have completed their Islamic education courses.

Ahmad chose to quit teaching rather than remain a part of the worsening education system. Still, he fears for the children in ISIS-run schools. “The Islamic State aims to raise this generation in darkness and to instill aggression and extremism in them,” he explains. “Children are preoccupied with fighting and vengeance…what they learn in the Islamic State schools nurtures and validates such urges.”

In Deir Ezzor, as in many parts of Syria under ISIS control, the extremist group has instated an entirely new curriculum, banning subjects like history, philosophy and music and arts. ISIS leaders claim that these subjects from the formerly secular curriculum conflict with Islamic teachings. Science is a particularly tricky subject. In schools where physics and chemistry are still allowed, teachers must carefully explain to students that scientific laws come from God. The teaching of evolution is completely banned.

In some Syrian schools, new subjects like ‘Islamic jurisprudence’ and ‘biography of the prophet’ have been added to the curriculum. The group has also removed all reference to the country’s name ‘Syria’ from textbooks, replacing it instead with ‘The Islamic State.’

Despite teaching this ISIS-approved curriculum, many teachers are still technically employed by the Syrian government in Damascus. However, ISIS forbids the acquisition of money from the Syrian government and threatens to kill teachers who collect their salaries. One lifelong Raqqa teacher claimed that as of November of this year, she hadn’t received her government salary in over six months. Now living in Turkey, she says that barely 30 percent of eligible students in her Syrian hometown still attend school. “Nobody wants to send their kids to school anymore because they would probably be recruited to fight and kill in the ISIS army,” she explains.

The choice for families, however, is a difficult one. Now that ISIS has destroyed secular schools in areas under its control, parents must decide whether to send their children to a radical Islamist school or no school at all. Even worse is the possibility that their children might be recruited for ISIS’s militant training camps, where young men are indoctrinated with a love of jihad. The camps teach courses on weapons and explosives, and boys as young as eight learn how to behead “infidels” and opposition fighters.

ISIS’s use of education to influence children promises trouble in the years to come. Even the defeat of the extremist group would not entirely wipe away the fundamentalist tendencies of children who have grown up under ISIS control.

One ISIS militant passionately explains how this generation of children has been groomed to inherit the caliphate. “God willing, this generation will fight infidels and apostates, the Americans and their allies,” he says. “The right doctrine has been implanted in these children. All of them love to fight for the sake of building the Islamic State and for the sake of God.”