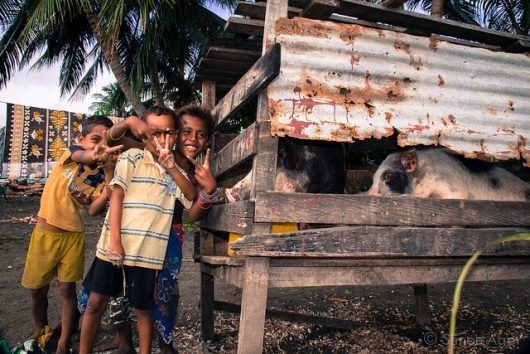 Education in the Solomon Islands is difficult to access for youth, creating a huge hurdle for the island nation. As a country made up of more than 300 inhabited islands, the challenge of attending school across the islands means around 20 percent of children are out of school. Uneven population distribution makes providing educational services difficult at best, and in the 2003 conflict, many schools were burnt down and teachers and students fled the violence.

As the number of out-of-school young people has increased, the Solomon Islands has seen a parallel increase in political violence as youth have found an outlet for their frustration in riots, crime and violence. A 2005 study by the United Nations Children’s Fund (UNICEF) found that under-18 youth were being recruited by armed groups. This prompted the creation of a peace education module, a community-based model bringing together educators, young people, community leaders and NGO’s. The program’s purpose is to foster understanding of peace, conflict and good governance. To address the tension and positively re-engage youth, the government and NGOs have increased their focus on education in the Solomon Islands as an impactful way to promote peace measures.

To address the tension and positively re-engage youth, the government and NGOs have increased their focus on education in the Solomon Islands as an impactful way to promote peace measures.

The content of the educational curriculum is being thoughtfully reconsidered, as it is cited as a potential causal factor in the Islands’ conflicts. A perceived divide between traditional customs and skills and colonial Western-style curricula has encouraged educators to innovate, implementing the use of native languages in schools and diversifying teaching materials on history, religion and culture.

In order for the peace modules and curriculum innovations to succeed, school enrollment and completion rates must improve. As of 2012, Education Policy and Data Center (EPDC) statistics show a high enrollment of both young boys and girls in primary school, with a net enrollment rate of 81 percent and a primary completion rate of 85 percent. However, only 72 percent of students were continuing their education in the Solomon Islands and enrolling in lower secondary school.

Since then, the hard work of local actors such as the Solomon Islands’ Curricular Development Division, church organizations and local women’s groups has demonstrated great commitment to making school more accessible. Partnerships with organizations including UNICEF, the New Zealand Agency for International Development and Save the Children have supported these efforts, and these powerful collaborations are rebuilding and innovating current educational structures.

Top Diseases in El Salvador A Look at the Life of Dr. Osotimehin
Scroll to top