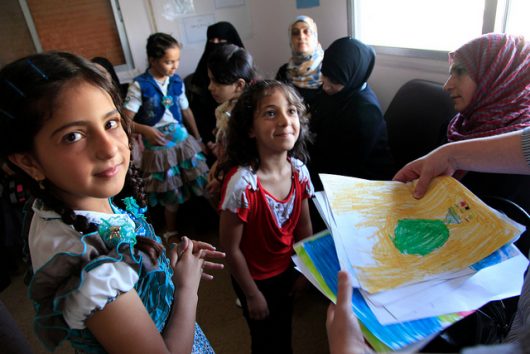 Greece serves as a new home for hundreds of thousands of displaced Syrian refugees. The country has opened its arms to over 57,000 refugees, over half of them women and children, thus creating a dense population of families within small areas.

Although the Greek government accepts new refugees it has no choice but to place these individuals in camps that, in many cases, do not meet humanitarian standards. The country strives to create a stable environment for these refugees, as it is estimated that the children have been out of school for an average of 1.5 years. This lack of schooling affects their potential as well as depriving them of a basic right to education, therefore education in Greece must be a priority.

With the help of volunteers, children are receiving an education through refugee schools located on campgrounds. Education in Greece, as well as many other countries besides, remains difficult for refugees to obtain.

This fund aims to reach approximately 20 million refugee children who are currently denied a proper education. The European Union used money from this fund to create a pilot program on May 16, in order to begin language courses for the refugee children in Greece. These courses are currently in session to prepare children for the school year that commences in September.

Teachers will be assigned based on the language of the refugee children, which will include English, Greek and their native tongue. The Greek government plans to unveil this education program beginning in September. The Ministry of Education, responsible for running the education in Greece, began language courses beforehand to bridge the language gap that held some children back. The courses will assign two to three teachers to each 150-student classroom.

“The average length of time spent living as a refugee is now 17 years, meaning that millions of children and young people will miss out on some, it not all, of their education, severely diminishing their own future life chances and that of their families and communities,” said Tanya Steele, interim CEO of Save the Children.

Less than two percent of global humanitarian aid goes to education. Education, as the United Nations is realizing, is crucial in the long-term. Without education, studies show that children are at higher risk of crime and violence.

Schools carry the promise of opportunity and aspiration for the future. Education creates a solid foundation for the rebuilding of society for those displaced.

Education in Greece portrays how many other regions are striving to help refugees. Students here, as with many other refugee schools, are only given two days of schooling per week. With the help of the European Union and the United Nations, teachers hope to push for more educational opportunities, including a 5-day school week.