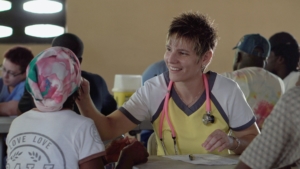 Since Russia launched a large-scale military operation against Ukraine in February 2022, millions of people have fled their homes, 7 million remaining displaced in Ukraine and 5 million fleeing to various neighboring countries.

Doctors Without Borders has maintained a presence in Ukraine since 2014, working to respond to the needs of HIV and tuberculosis patients. As the war has escalated over the last couple of months, the organization has halted its normal activities and launched emergency projects in Ukraine, tending to the current residents as well as the refugees in surrounding countries.

Since implementing these teams at the war’s beginning, the organization has carried out more than 800 medical procedures in the subway stations, where Ukrainians are taking shelter against Russian bombing, according to its website. A team in Southwestern Ukraine has started tending to the needs of displaced people who need mental health care, and those who were receiving treatment for injuries and illnesses before the war broke out.

Due to the lack of trauma training that many Ukrainian doctors have, Doctors Without Borders has employed trauma specialists to teach those working in the hospitals how to assess and deal with trauma cases. A large effect that Doctors Without Borders has had on helping in Ukraine is the donation of medical supplies to the already-existing clinics and hospitals in the country.

Prior to the war’s outbreak, supply lines around the country were already extremely insecure, and the effects of the war have heightened the uncertainty of the lines even more.

Ukrainians have been in desperate need of medical equipment since the war’s beginning, having to make do with a very limited supply of first-aid kits, surgical tools, general resources and funds to administer vaccines. In March 2022, Doctors Without Borders delivered its first shipment of medical supplies to the Ukraine Ministry of Health and has continued to donate on a regular basis, according to its website.

Before the war, around 35% of Ukrainians had been fully vaccinated against COVID-19. As the conflict continues to rage, a surge of COVID-19 cases is taking place as a result of the disruption to testing and vaccine administration. As of August 2022, there are currently more than 4,000 active cases of COVID-19, and very limited supplies to help.

Doctors Without Borders teams around the world have been responding to the pandemic since 2020 and make no exception in Ukraine as the war brings up other pressing health issues. COVID-19 activities are remaining at the forefront of health care within the organization’s emergency activities, as Doctors Without Borders is providing Ukrainians with regular testing and vaccinations.

In addition to medical supplies and treatment, Doctors Without Borders has also donated a large supply of cold-weather clothing and tents to support the large population of homeless Ukrainians, according to its website. As the war continues to rage, Doctors Without Borders, in conjunction with other global aid organizations, is doing everything possible to provide relief to those who are unfairly facing displacement and danger.