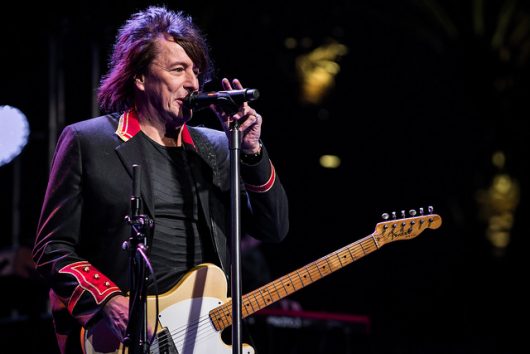 Richie Sambora is not just known as the guitarist of the band Bon Jovi from 1983 to 2013, but he is also known for his humanitarian work, now including being the co-founder of Csnaps, the new humanitarian app that allows celebrities to take pictures with fans and raise money for a charity of the celebrity’s choice.

“Fans are always going to ask their favorite celebrities to take pictures with them,” Sambora said in an interview with People Music. “By using Csnaps, you get a picture with your favorite star and money goes to help good causes and those in need, so it’s a win-win for everybody.”

Charities must register with Csnaps.org to be eligible for donation. Among the registered charities are The Humane Society, PETA, Smile Train, and the ALS Association.

The app also benefits publicists and celebrities, who can break news about their clients on Csnaps and have the media purchase it. Not only does this raise money for a charity their clients care about, but it allows the publicist to control what is said about their client, and the client gets new followers and good publicity.

So how does it work? A fan approaches a celebrity and asks for a selfie. Using the catchphrase, “Csnaps only please,” the celebrity will take a selfie with the fan through the app, and for a minimum of three dollars, 80 percent of which goes to a charity of the celebrity’s choice, the fan has their picture and a sense of contentment knowing that they have helped save a life, or make someone’s life better.

Csnaps is available on iTunes now, but no plans have been announced for it to be on any other platforms. Hopefully after witnessing Csnaps’ impact, other charities and platforms will join in on the goodwill.