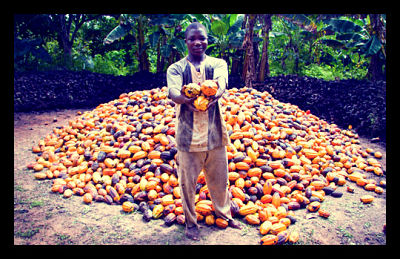 In a press release published on PR Newswire, the world’s biggest chocolate company, Mondelez International, Inc. recently announced an agreement that it made with the Ivorian government’s Conseil du Cafe Cacao (CCC) to aid farmers with more sustainable production of cocoa.

Mondelez International is known for producing delightful, globally well-known, and billion-dollar chocolate brands such as Toblerone and Cadbury. The CCC agreement also covered building “thriving communities” in Cote d’Ivoire. Thus, the non-profit organization, CARE International, which tackles poverty and injustice in 87 countries, will lead the program Cocoa Life in Ivorian cocoa communities through 2016.

Sustainability is the key goal of this program and in order to achieve that, partnership is essential. Thus, Mondelez is teaming up with CARE International and the Ivorian government to create and maintain a sustainable production and supply of cocoa, and to empower cocoa farming families to “create the kind of communities they and their children want to live in, while promoting gender equality.”

As a result of this goal, Cocoa Life and CARE International initiated a program in Cote d’Ivoire working in 11 villages helping approximately 4,000 farmers with production of cocoa, and improving 40,000 lives. Both organizations set up meetings where farming families discuss what they need and achieve desired development results through “Community Action Plans.” In addition to meetings, and in honor of preserving gender equality, meetings were held for women specifically to enable them to voice their opinions and concerns. The press release also mentions how Cocoa Life plans to involve women in farmer training and community life all together.

The Country Director of CARE International in Cote d’Ivoire, Balla Sidibe, mentioned how business plays a key role in fighting poverty and injustice, and in order to better facilitate that, Mondelez must incorporate farmers and communities as the central part of the supply chain. And finally, the press release includes last November’s achievements in Cote d’Ivoire where Mondelez International made a 100 million dollar commitment to aid 75,000 farmers increase productivity. The Cocoa Life program is a $400 million ten year commitment to “improve the livelihoods and living conditions of more than 200,000 cocoa farmers and about one million people in cocoa farming communities around the world.”