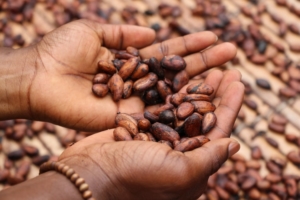 When a person craves a quick snack or pick-me-up and runs to the store to grab their favorite chocolate bar, they may not wonder where the chocolate came from in the first place. However, much of cocoa production takes place in West African in places like the Ivory Coast and Ghana. The result of this cocoa harvest is sweet, but the process is quite bitter. Currently, 2 million children in these countries labor to produce chocolate. Over the last few years, measures have removed children from this labor. However, the problematic relationship between chocolate production and child labor has increased from 30% to 41%.

The Conditions of the Children

Children often work on small cocoa farms in the Ivory Coast, and mostly as victims of human trafficking. They work day in and day out using machetes and harmful pesticides to harvest cocoa pods. The children are very young and overworked with hunger. Most of them have not even gone to school for many years.

The world’s chocolate companies are aware of the atrocities of chocolate production and child labor that are part of their products’ creation. Many have pledged to eradicate child labor in the industry, but have consistently fallen short. In an article in the Washington Post, Peter Whoriskey and Rachel Siegel addressed this issue. They outlined the continuous failure of many large companies to remove child labor from their chocolate supply chain. As a result of these companies’ negligence, the odds are substantial that a chocolate bar in the United States is the product of child labor. Some of the biggest chocolate brands, such as Nestle or Hershey, cannot even claim that child labor is not involved in their chocolate production.

The U.S. Department of Labor’s Bureau of International Labor Affairs (ILAB) is combatting child labor in the chocolate production process. It has been creating plans and programs to break the cycle. Its research and data show that the Ivory Coast and Ghana produce 60% of the world’s chocolate, with a steadily increasing demand for chocolate worldwide. This will likely exacerbate child labor issues instead of stopping them. As the leading funders of child labor combatting programs, ILAB has raised $29 million to fight child labor in chocolate production in the Ivory Coast and Ghana.

ILAB formed the Child Labor Cocoa Coordinating Group (CLCCG). It brought together the governments of the Ivory Coast and Ghana and representatives from the International Chocolate and Cocoa Industry together. They had essential conversations that are integral in eradicating child labor in the chocolate industry.

The CLCCG works toward eradicating child labor. It has also been integral in raising awareness about this issue and creating resources to combat it. However, it cannot do it all by itself. Governments, stakeholders and large chocolate companies must commit themselves to removing children from harmful environments for the sake of cocoa production.

Chocolate production and child labor have gone hand in hand for decades. However, through the efforts of government organizations, the cocoa production process could become as sweet as its end product.