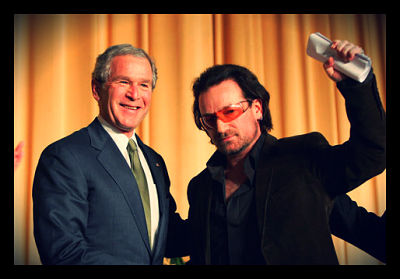 As stated in his 25 April 2013 press conference, George W. Bush may consider Bono “a pal,” but he is not the only one. George H.W. Bush presented the Liberty Medal to the U2 frontman at the National Constitution Center (2007) and Laura Bush joined a meeting with them to discuss AIDS (2005). They have had a decade long relationship revolving around their mutual passion for humanitarian work in Africa.

Bono started hounding politicians in 2002 when he started his non-profit Debt, AIDS, Trade, Africa (DATA). They had a meeting that year resulting in a 5 billion dollar aid package.  Bono also persuaded the former Secretary of the Treasury Paul O’Neill to take a 4-country tour of Africa. This marked an “historic shift in Washington’s stance on aid after years of cuts.”

However, mutual skepticism has marked the their relationship. Bono acknowledged that as he pushed the former president on aid issues, Bush pushed back.  Contentious issues included speed of delivery of the Millennium Challenge money and the Global Fund.

Their friendship, rooted in their shared concern for humanitarian work in Africa, kept Bono going back to Washington.  Twice in 2005 they met in the White House to discuss pro-poor aid. In 2006 Bush invited him to speak at the National Prayer Breakfast. Bono used the opportunity to talk about the ‘Jubilee’ year in respect to the Jubilee Drop in the Debt campaign. The next year former president George H.W. Bush presented the Liberty Medal to Bono. After over a decade of arguments, discussions and commitments to aid, it is not surprising Bush considers him “a pal.”

Sources: Bush on Bono: ‘We became pals’ , US and Europe boost aid to poorest countries , Bono and O’Neill in Africa , Bono Visits Bush at the White House , Bono Remarks at the National Prayer Breakfast
Photo: Bush and Bono 2006