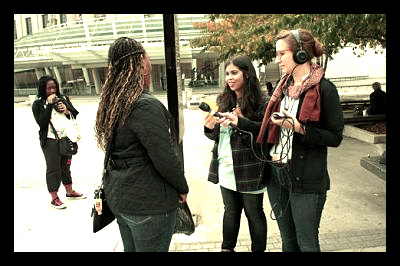 On November 16, global poverty had a unique light shed on it thanks to journalism students from around the globe. As part of a “pop-up newsroom,” students in the UK, U.S., Taiwan and India hit their local streets armed with their journalism training and social media outlets to report on those who experience poverty directly.

Politicians usually hold the platform for discussing poverty but they are rarely the ones who actually experience it. Instead, the journalism students went through locally-based organizations and interviewed both victims and combatants to gather on-the-ground experiences of poverty and the policies meant to address it. David Baines, who led the UK side of the project, stated one of the goals was, “to make the complexities transparent rather than trying to simplify things,” as is often done by politicians.

The pop-up newsroom idea began at California State University Northridge (located in Northern Los Angeles). As technology changes the way we can access information, Dr. Melissa Wall (a journalism professor at CSUN) wanted to find a way to utilize the immediacy of social media to inspire positive changes. By appealing to a younger population, the pop-up newsroom allows important issues, like global poverty, to reach people of all ages and of all interests.

November 16 marked the first time the experimental pop-up news reporting went international. The universities that participated have a number of international students and the fact that they were reporting from different countries made this a truly global event.

Not only are the students participating in an innovative journalism experience, they are adequately trained to do so. The Asian College of Journalism in Chennai, India is one of the most prestigious in the region and covering inequality is a requirement for all students. At Newcastle University, UK, the students prepared for this project by studying the Joseph Rowntree Foundation’s guidelines for good reporting on poverty.

Reported topics ranged from art, health, feminist issues and economic inequality. Using the hashtag #livepoverty, students reported their stories on Twitter while in the field, as it was happening. By encouraging students to post immediately, the project emphasized that global poverty is a constant force that doesn’t go to sleep at night, but rather hangs over its victims 24 hours a day. With participants like the UK and U.S., the pop-up news stories proved that poverty is experienced even in the wealthiest countries in the world.