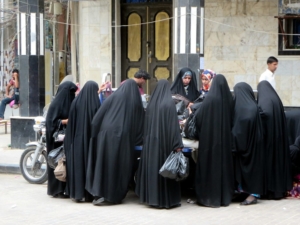 The end of a ten-year war seems like a time of hope, of rebuilding and starting over. Yet, for Iraqi women, hope does not seem like it’s in the cards. The last ten years have not been a time of progress for them. Rather, it has been a time of regression, in which many of their rights have been taken away, either by law or by the increasing amount of violence occurring in Iraq.

On paper, it looks like the women of Iraq are increasingly engaged with civil society. With elections happening in April, pictures of Iraqi women of different political parties are appearing throughout the city of Baghdad, giving a glimpse of equality amongst men and women. However, in reality, women are not making much of a political appearance, though not through the fault of their own. Iraqi Prime Minister Nouri al-Maliki has not elected a female to a single Senior Cabinet position and only one Department is headed by women: The Ministry of Women’s Affairs.

Violence in the streets of Iraq is also resulting in a loss of freedom for Iraqi women. It is no longer safe for them to walk in the streets alone, leaving many stuck inside their homes. According to many women’s groups, the increase in violence and poor security for women is the result of “the social and economic pressure that families face, the lack of public and political will to stop it, and the increased religious conservatism that often justifies the violence”. The lack of political will to stop it can be seen in the replacement of the Family Statutes Law, with one giving cultural and religious groups control of regulating family affairs, meaning that tribal leaders and religious groups can decide on issues involving divorce, marriage, custody, and inheritance using religious laws or cultural ways of living. Often times, these laws and ways of living do not favor women. This is a large setback for women because it means that women are not guaranteed equal treatment under the law.

The Iraq of today is worse for women than the Iraq of 1980. Yet, this has not discouraged Iraqi women from still standing up for women’s rights and hoping for change. Political participation is one way for women to gain freedom, yet, much more must be done to ensure equality is in their future.