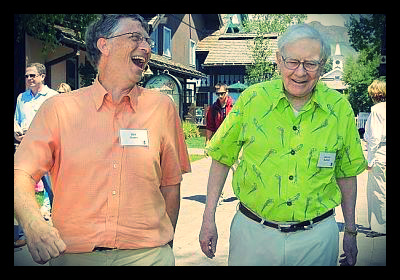 When you think of Bill Gates, is your first thought Microsoft or astoundingly wealthy billionaire? How about philanthropist? The latter may have slipped your mind completely.

Through the joint efforts of the Philanthropic Research Institute, a nonprofit organization focused on creating philanthropic awareness, Forbes compiled a list of America’s fifty top philanthropists that have given the most money away. Below are the top five U.S. philanthropists.

1. Not only does Gates’ hold the spot as the world’s richest man, but with the collaboration of his wife, Bill and Melinda Gates have snagged the spot as the U.S. top philanthropists donating $1.9 billion in 2012. The Gates’ lifetime giving is estimated at a whopping $28 billion.

2. Not to be outdone, Warren Buffet makes a close second having donated $1.87 billion in 2012 with a net worth of $58.7 billion. He fell short of the Gates’ by only $35 million. However, Buffet has committed to donating the remainder of his fortune before or upon his death mandating that it be put to use within ten years following the donation.

3. George Soros, founder of Soros Fund Management LLC and Forbes’ number one hedge fund manager, has donated $763 million with a lifetime giving of $10 billion putting him comfortably in third place.

4. Facebook founder and CEO Mark Zuckerberg secured the fourth spot. With an estimated net worth of $23.4 billion, Zuckerberg donated $519 million in 2012 thus extending his lifetime giving to $549 million.

5. The Walton family, most notably known for Wal-Mart, are brought in at the final spot as the top five U.S. philanthropists. With a net worth of $144.4 billion, they gave $432 million dollars in 2012 bringing their lifetime giving to $4.6 billion dollars.

The total amount of money given by these top philanthropists towards philanthropic work in 2012 was more than $5.48 billion. That’s nearly one-fifth of what it would cost to end world hunger with the annual shortfall sitting at $30 billion per year.

Of the top philanthropists mentioned, no one donated more than 3.2 percent of their net worth but the astounding amount given by less than ten individuals cannot be ignored.

Forbes has reported that there are currently 1,645 billionaires in the world. It will take more than a call to action by the elite philanthropists. In order to put world hunger to an end, it will take a small step from everyone capable of helping.

Just think, how much is 3.2 percent of your net worth?  How can a portion of the money you spend regularly be used to make the life of someone stricken by poverty more sustainable? The answers do not lie solely in how much the monetarily elite of the world are donating, but the efforts made by those with the power to influence those groups.