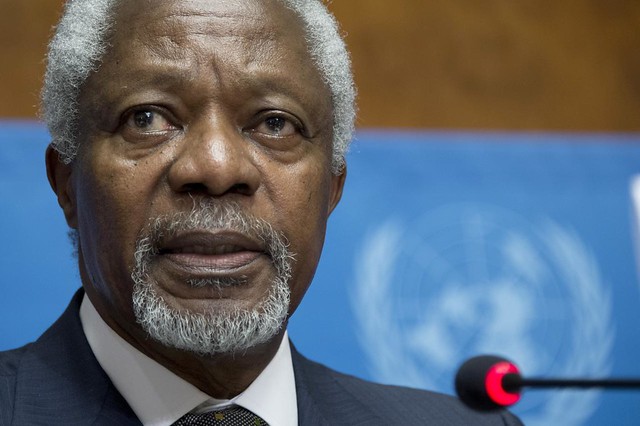 Born into an aristocratic family in Ghana in 1939, Kofi Annan’s experience with advocacy began at a young age. His education taught him early that suffering anywhere was an issue of global concern. By the time he graduated in 1957, Ghana had achieved independence from Britain, igniting his passion for international relations. That would follow him into a lifetime of civil service, beginning at the United Nations in 1962. He served in a number of capacities during his time at the U.N., including Peacekeeping Operations during the Rwandan genocide. He eventually filled the role of Secretary-General of the United Nations Security Council in 1997. Kofi Annan was a gifted speaker who left an impression on many people worldwide.

These top 12 quotes by Kofi Annan focus on themes of peace, global stability, leadership and advocacy. These are themes that defined Annan’s career and legacy. In December of 2001, Annan was awarded the Nobel Peace Prize, alongside the United Nations, for his work towards ending the HIV/AIDS crisis. This was a landmark achievement in his career and a massive step in combating the epidemic.

His retirement from the United Nations by no means signaled an end to his commitment to civil service and advocacy. Annan went on to continue promoting a more peaceful and stable world through work with multiple organizations in his home country, even contributing to peace efforts in Syria’s civil war.

On August 18, 2018, the world lost Kofi Annan to illness. But his legacy lives on, not only in these top Kofi Annan quotes, but in the continued impact of his actions and words on the world of advocacy and peace.