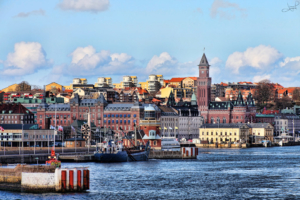 When COVID-19 struck the world, Sweden did not close its borders. Instead, they opted to follow the standard health and safety guidelines. Although stores, schools and businesses remained open and masks hardly worn, many Swedes still stayed at home. Sweden now hovers a little over 100,000 total cases with outbreaks that have occurred in the early year, a thousand deaths in nursing homes and losing 7% of inhabitants. There are many reasons for Sweden’s success. This is due to lower population density, social distance guidelines being adhered to and early testing. Even with these positive things, the death toll still darkens an otherwise phosphorescent experiment.

Unsurprisingly, poverty is correlated with higher Covid-19 mortality. One Swedish study claimed that low-income, low-education, unmarried and immigrant males have a higher risk of death from COVID-19. Men in the first and second tertiles of disposable income are five times as likely to die. They also experience 80% higher mortality, than those in the top tertile. This holds true for immigrants from low and middle-income countries, who have a 2.5 times higher mortality among men, and 1.5 times among women, compared to those born in Sweden. Immigrants are more than twice as likely to die than natives.

Therefore, income inequality and child poverty have increased, according to poverty expert Radda Barnen from Save the Children. Around 10%, 186,000 children, live in poverty in Sweden. In his charity work among the poor, Barnen claims that poverty has only worsened their living conditions. This is especially for the undocumented migrants, who share hostels, resulting in cramped, rapidly spreadable sickness. It is commonly stated that COVID-19 does not discriminate, but in light of this research, this is untrue. The virus does discriminate. Those most vulnerable have the worst chance.

In terms of aid, Sweden has provided fiscal measures to its citizens. For example, SEK 264 million have been allotted toward recovery. In addition, SIDA, the Swedish International Development Cooperation Agency, has provided SEK 1.25 billion for virus aid. SIDA also aided farmers to continue making a living, since most regions rely on trade. Through the International Fund for Agricultural Development (IFAD) program Rural Poor Stimulus, SIDA has given SEK 30 million for this year, and 20 million next year.

Other countries both admired and criticized Sweden’s approach to COVID-19. Sweden may have passed Denmark, Norway and Finland on the death toll. However, Sweden’s success can be seen in the mortality remains lower than in the UK, Spain and Belgium. Even with a lockdown, the elderly in care homes still suffer, experts have observed. A lockdown does not decrease mortality from the virus, which is plain when comparing the UK’s experience with that of other European countries.