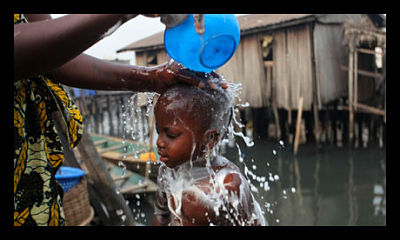 In a small village of 45 households, Betty Torkwase Ikyaator asks the children for a tour. Ms. Ikyaator asked them where they used the toilet. The children point to an open field, spewing with a disgusting stench, and giggle. Ms. Ikyaator and her team of eight take the children back into the village and gather a group of villagers for a simple presentation. She puts a plate of food, an open water pitcher and pile of excrement next to one another. The villagers watch as files move from the excrement to the pitcher and back again. A simple demonstration such as this makes evident the dangers of contamination, but more importantly, the importance of sanitation.

Shortly afterwards, she led a discussion with community leaders about hygiene and the importance of proper waste disposal systems. A committee of villagers is formed which commits itself to providing each household with a toilet of its own. Ms. Ikyaator leads these discussions to enlighten villagers in the most remote areas of Nigeria about the importance of sanitation. This is no easy task, but by showing villagers the dangers of improper sanitation, Ms. Ikyaator believes that she can empower these communities with the knowledge and desire to change their current living situations for the better.

According to Ms. Ikyaator, follow-up is important. “We keep coming back to the community, checking in on them, giving them encouragement and supporting the procress. But once they realize the benefit, especially in keeping their children healthy, it becomes part of their way of life.”

Ikyaator’s community-led program could prove beneficial to more than just Nigeria. In Africa, 62% of all people do not have access to a toilet. For every $1 spent on improvements to sanitation, $9 USD is typically yielded in reduced health costs, increasing returns on education and safeguarding water resources. Poor sanitation is linked to cholera, schistosomiasis, trachoma and diarrhea, the second largest killer of children in developing countries. Improved sanitation has a serious impact on health and social development. Conversely, sanitation is the most cost-effective major public health intervention to reduce childhood mortality. In addition, access to proper toilets creates physical environments which promote self-respect, dignity, and enhanced safety for women and children, many of whom suffer from sexual harassment and assault when defecating at night or in remote areas.

As of right now, the world is not on track to the meet MDG 10 to halve the proportion of the population without access to safe drinking water and sanitation. From 1990-2004, the WHO and UNICEF worked together to provide 1.2 billion more people with access to improved sanitation. But, the UN is 700 million people short of missing the MDG. And without proper sanitation and clean drinking water, poverty eradication and disease control are impossible.