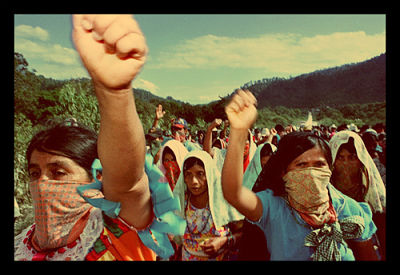 When thinking about poverty and hard times, it’s important to remember that no matter how bad one might think they have it, there are always people around the world who have it worse. One group of people who have to deal with extreme poverty and repression are the indigenous populations in Mexico and Central America.

The Zapatista movement (an armed revolutionary group based in Chiapas) began in 1994 and has been in a declared war against the “Mexican state” ever since. During this time, the North American Free Trade Agreement (NAFTA) was signed between Mexico, the United States, and Canada, which ended up taking many jobs away from local farmers in Mexico while throwing millions into poverty. It also revoked Article 27 of the Mexican constitution which granted land rights to the indigenous. After the article was revoked, these indigenous people were driven off their lands by the government.

While the Chiapas have taken steps to improve the lives of the indigenous population and maintain their fundamental rights, more still needs to be done. A big step forward took place in 2009 when the state adopted the Chiapas-UN Agenda. The deal put a strong focus on improving health and education while also dealing with poverty and the environment. The state amended its constitution in the process. While each president promises to lend a helping to these communities, too often they fall short.

One looks at the indigenous people and it will become obvious that their ideology has never died and the people will always reach for their goal of demolishing deprivation and injustice within Chiapas. Their continued revolutionary ways set an example for the rest of the world that corruption, poverty, injustice, and environmental devastation will not be tolerated as the underdog will continue to push forward until justice is served.