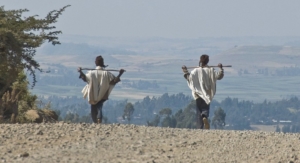 Individuals with the disease experience physical disability, emotional distress and poor quality of life. Increased size and weight of legs make it difficult for the person to do daily activities, such as standing or walking. It also prevents the individual from working or finding employment. After lymphedema and skin change becomes chronic, stigmatization occurs. Affected people often cannot attend school, religious events or local meetings.

The disease keeps people from working, and that puts the already afflicted rural farmers unable to create income. A study conducted in one of the southern areas of Ethiopia showed that the cost of podoconiosis is more than $16 million per year due to acute inflammation and swelling of the legs. Also, each affected person loses 45% of their working days per year.

Ethiopia’s Ministry of Health has been working on ending this illness via the “National Neglected Tropical Diseases Master Plan,” updating the initiative every five years since 2012. Organizations, such as Ethiopian Health and Nutrition Research Institute and the Brighton and Sussex Medical School, collaborated with WHO to map the disease, covering 1,304 communities in Ethiopia. Overall, the partnership was also responsible for finding resources, as well as monitoring and controlling the disease. Among 345 targeted districts for Podoconiosis control, 150 have received treatment and prevention services and the country managed 67,588 lymphedema cases from 2016 to 2020.

Mossy Foot Project is an NGO that has been supporting people with Podoconiosis since 2000. They provide protective shoes including oversized ones without charge. They also perform foot washing and bandaging treatment for lymphedema at several clinics in the country.

Soles 4 Souls, The Shoe That Grows and Samaritan’s Feet are nonprofit organizations providing free shoes for the poor. They could be prospective donors for Ethiopian farmers. The Shoe That Grows program is specifically for children who need shoes but cannot afford a new pair every time their feet grow. Their shoes can expand in 5 sizes, so a kid can wear them for a longer time.

Podoconiosis, neglected tropical lymphedema in Ethiopia, has been an issue for the health and economy, especially those in underserved rural areas. Yet, the effort in fighting the disease has been growing as well. Continued support, such as providing shoes and foot hygiene, will result in the elimination of this disease and poverty reduction in rural Ethiopia.