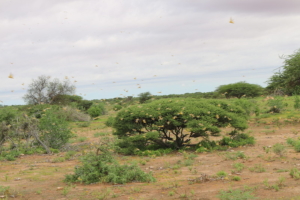 Somalia faces a constant struggle for enough resources to feed the entire population. Millions of citizens throughout Somalia suffer from hunger and poverty. Somalia is located in an area that suffers from extreme droughts and experienced one in late 2019. Droughts throughout Somalia leave millions of people without proper resources, as animals and crops go without proper nutrition to ensure food for citizens. However, Somalia, and Africa as a whole, are dealing with a more destructive problem this year. Locusts are impacting both the economy and the issue of starvation in Somalia, with millions and maybe even billions of insects flying across the continent. For a country that is currently dealing with hunger and poverty issues, locusts and their growth could be extremely detrimental to Somalia.

The Second Wave of Locusts in Somalia

According to recent studies and developments, there is currently a second wave of locusts swarming throughout Somalia and Africa. The second wave has the potential to be more harmful to the economy of Somalia because it is occurring during harvest season. The harvesting of crops is a positive thing for the citizens who continue to lack food and resources. Millions of locusts can cause enough damage to crops to equate to feeding a small population city. Furthermore, Somalia has not experienced a plague of locusts as strong as this one in about 25 years.

Additionally, COVID-19 is making this plague more damaging for Somalia and the citizens. The combination of both events will cause over 25 million Africans to not have proper food resources throughout the remainder of the year.

All Hands-on Deck Approach to Locusts in Somalia

To ensure that the effect on locusts on the economy and starvation in Somalia is minimal, the government has decided to join with the organization Food and Agriculture Organization of the United Nations (FAO). This partnership includes efforts to control and stop the growth and spread of locusts around Somalia and Africa. The control of this plague ensures that Somalia does not take a dramatic and harmful hit to the economy. It would also protect citizens from food shortages.

The Somalian government depends on communities to assist with controlling the spread as well. These efforts include using ground and air vehicles to spray pesticides on developing eggs and locusts flying throughout affected areas. Thirty ground vehicles are being used to control spread and growth. These vehicles can destroy eggs and developing locusts which are not able to fly. Additionally, in May, two helicopters were brought in to help control flying locusts and cover widely affected areas. So far, FAO has covered over 197,000 acres of land throughout Somalia and plans to cover over 444,000 acres by the end of 2020. Going forward, FAO will conduct similar control efforts. This plan also has the possibility to take care of any future swarms of locusts that may occur.

Somalia, and Africa, continue to struggle with locusts swarming and developing. The locusts have had a negative effect on the economy and starvation in Somalia. The country already has millions of citizens who lack the proper amount of daily food resources. Additionally, Somalia has experienced droughts that have changed the economic outlook of the country in recent years. Adding the plague of locusts into the equation will only continue to damage food resources in Somalia, especially since they are arriving during harvest season. However, the Somalian government has decided to address this problem by working with the Food and Agriculture Organization of the United Nations (FAO). This organization created control efforts to stop the growth and development of locusts. FAO has covered massive amounts of Somalian land with control efforts and plans to continue covering more land throughout 2020.