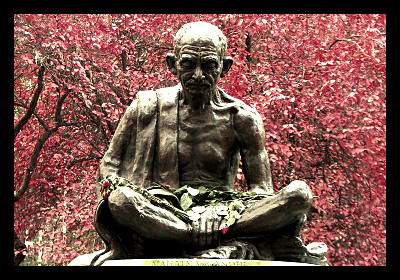 An oft heard phrase, some cynics go as far as to call the title of this piece, which is also a famous quote, corny, utopian  or unrealistic. Yet the individual who said it would be defined by the antithesis of the spirit behind those words. As it stands, Mahatma Ghandi is remembered as the father of a nation, much like the way that we refer to our founding fathers: Thomas Jefferson, Benajmin Franklin and James Madison to name a few.

Gandhi is certainly one of those historic figures of the past that a great many people have at least heard of. Especially concerning his bravery and courage to stand up to an empire, beginning just with himself. His choices and principles inspired a people to rise up against authority. Few have truly come to understand how, and maybe even more importantly, why he choose to do what he did.

Mahatma Gandhi is, for the most part, unanimously regarded as the leader and motivational spearhead of the Indian Independence Movement that overthrew the British empire. Almost exclusively using his rights of civil disobedience, always grounded in non violence, he managed to topple one of the largest and most sophisticated military conquerors in history.

Born on October 2, 1869, to a prominent father in the local empirical government, and to a mother whom was the fourth wife of the former. At the age of 14, as was customary, he wed by an arranged marriage, and by 15 had his first child that died soon after birth.

In his early adulthood he moved to South Africa for a job prospect. What he experienced, through the Apartheid segregation system, profoundly affected him. Soon he began learning civil disobedience tactics, and became a social activist. In 1915 he returned to India, equipped with the knowledge and skills he would employ and later became revered for.

It was not long before Gandhi became deeply involved with the independence movement. Through his steadfast persistence in following the Sacred Male and Sacred Female behaviors, he became the figurehead and emotional leader of the campaign.

The Salt March is one of his hall mark actions, when he lead a walk through rural India, encouraging civil disobedience and non-compliance to the British Empire imposed salt tax. Though he was arrested many times during the action, it is considered a pivotal point in his rise to prominence amongst the Indian people.

Babo as the Indian people affectionately call him, achieved one of his major goals on August 15, 1947. That is to say, on this day, India became independent from the ruling British empire.

His legacy of forgiveness, non-violence in the face of overwhelming odds and his persistence have left a deep impression of the conscience of the world. We end this piece as we started. The brevity and truth behind his words cannot be improved upon.

“An eye for an eye leaves the whole world blind.”
– Mahatma Ghandi