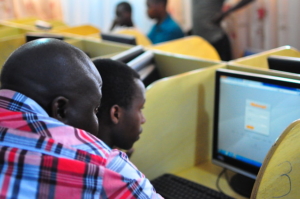 Even with the challenges the country faces in establishing complete infrastructure, the positive influence of internet coverage in Ghana can be seen from the following data from 2016:

An African organization called Developers in Vogue provides a haven for Ghanaian women pursuing the education in the Science, Technology, Engineering and Mathematics (STEM) fields. Women make up over 50 percent of the population in Africa but less than 20 percent of the science and engineering world in Africa. Developers in Vogue combats gender preconceptions on one level and lack of opportunity on another. Providing scholarships, training courses and a project-based curriculum for women seeking a STEM career, Developers in Vogue connects students with internship and jobs. Their aim is to inspire social impact through technology and problem-solving by using real-life cases from their communities in their curriculum.

Another company, Hopin Academy in Tamale, Ghana, works toward supporting students by connecting them to the courses most appropriate for their interests and skills. Through peer-to-peer development and local innovators, the tech hub connects Ghanaians from different backgrounds to practical niches in the local job market. One of the school’s students, Mercy Hammond, is studying BA in Development Education and had her secondary education at Aburi Girls’ Senior High School in the Eastern Region. She is the owner and director of Sparkle House Enterprise that was registered on June 28, 2017, and is involved in the production of jewelry made of both beads and soft metals.

As Christoph Fitih, Sales Director for Africa branch of Parallel Wireless states, African countries need to adopt new technologies to prevent further marginalization of Africa from the world economy and eliminate the widening of the current digital divide between Africa and the rest of the world.

Businesses in Ghana understand the time is ripe to create an online presence and even necessary as the world market starts to move more and more toward internet users. MEST, a Pan-African organization partnering with global tech giants, offers aspiring entrepreneurs a rigorous, fully sponsored 12-month program to top-graduates in several African countries including Ghana. Training includes business, communications and software development as well as hands-on project work, giving graduates the chance to pitch their final idea to the board and receive seed funding for their entrepreneurship. Academics and teachers from all over the world bring their experience to the company.

More internet coverage in Ghana means tech companies such as Hubtel and Rancard have become Pan-African brands and according to Nana Prempeh, co-founder and CEO of Asoriba, Ghana has great strengths when it comes to the tech ecosystem. MEST has been a strong backbone of the community. Other global companies partnering with Ghana’s many startups and tech hubs include Google, Amazon Web Services and Microsoft, all connected through MEST.

Ghana’s comparatively stable electricity, security and internet infrastructure exists despite the series of damaging military coups the country went through before 1981. Even though fewer than 1 percent of African retail sales happen online, e-commerce will sky-rocket in Africa, according to the technology review Ghana’s Last Mile by Jonathan Rosen. He hopes issues with unpaved roads and confusing street-labeling will soon be solved through the same spirit of innovation that is already sweeping the nation.

Broader internet coverage in Ghana brightens its future in tech and the online market. There are obstacles of infrastructure to overcome and yet great hope for keeping up with world-wide tech hubs remains. Perhaps the country’s name, roughly derived from the words meaning Warrior King, gives a glimpse of the spirit of the country.

Investment from giants like Google and Amazon Web Services spearhead the beginning of partnerships with corporations all over the globe, as other companies begin to take notice of Ghana’s local hubs and competitive training. Most encouraging is seeing the hands-on training of MEST addressing communities and providing a stream of trained tech-students into the job market.