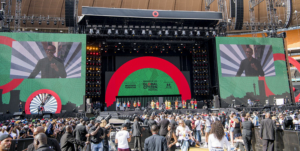 On Sept. 25, artists, world leaders and celebrities came together for Global Citizen Live, a 24-hour concert event to bring the world together to end poverty. Participants showed support for Global Citizen’s Recovery Plan for the World. That plan has five goals: ending the hunger crisis, creating equity for all, ending COVID-19, protecting the earth and resuming learning for everyone.

What is Global Citizen?

Global Citizen is an organization with the goal of ending extreme poverty by 2030. It plans to do this with the help of 100 million “Global Citizens,” who join the movement. On the Global Citizen platform, engaged citizens can learn about and take action against the systemic causes of extreme poverty. Not only that, but those who participate in the fight against poverty can earn rewards for their efforts including attending music performances and sporting events.

Here are Global Citizen’s plans for achieving each of the Recovery Plan of the World goals:

Samantha Power, the administrator of the United States Agency for International Development (USAID), pre-recorded a message announcing that the United State was donating $295 million “to stave off famine and extreme hunger, confront gender-based violence and address the urgent humanitarian needs the COVID-19 pandemic is leaving in its wake.” French President Emmanuel Macron announced that France would double its contribution of COVID-19 vaccines to impoverished countries from 60 million to 120 million shots.

Global Citizen Live is one of the largest-ever worldwide charity events, and yet, the goal was not to raise money. Unlike many similar events, the goal was to get the attention of world leaders and show that people support direct action for the Global Citizen’s Recovery Plan for the World issues. In fact, the concert was completely free. For instance, the 60,000 people in attendance at Central Park had to earn their audience spots by doing things such as contacting their members of Congress, signing petitions and sending tweets.