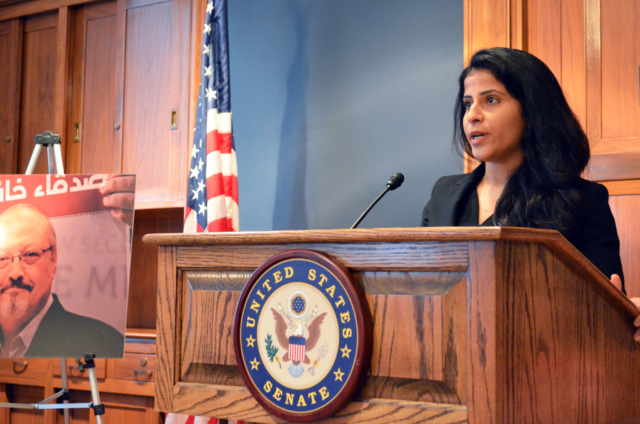 Al-Hathloul has made her presence as a Saudi Arabian women’s rights activist known on more than one occasion with a series of bold actions opposing the Saudi government’s stances on certain issues. For example, al-Hathloul openly expressed her opinion on the nation’s driving ban for women in 2013. Shortly after, her father took a video of her while she was driving in Saudi Arabia that went viral. Al-Hathloul was arrested and held for more than 70 days as she tried to cross the border from the United Arab Emirates into Saudi Arabia while driving.

She also shaped a campaign against the male guardianship system, which she believes consistently limits the rights of women. Al-Hathloul was among 14,000 signers on a petition to abolish the male guardianship system and was also one of the first women to stand for municipal elections in Saudi Arabia. In March 2018, al-Hathloul and more than 10 other women’s rights activists were arrested for their efforts to oppose the Saudi government. The group faced imprisonment and the media denounced the women. About a month after al-Hathloul’s arrest, the Saudi government lifted the driving ban. However, she faced a sentence of nearly six years in prison under multiple charges.

Her Family’s Plea and Her Ordeal

Notably charged under “Saudi counter-terrorism law,” Al-Hathloul attempted to appeal her initial guilty verdict. Al-Hathloul’s sister Lina has consistently advocated for Al-Hathloul’s case. Lina informed the public, together with several supportive organizations, of the torture, sexual assault and solitary confinement al-Hathloul underwent in prison. The Saudi authorities have rejected accusations of torture or wrongdoing. Al-Hathloul even went on a hunger strike to protest the conditions she and the other reformers were subject to because she did not want to endure such conditions anymore.

Lina has pleaded to the international community for support. Organizations call for reform in Saudi Arabia and for the involvement of Saudi Arabia’s allies. The Saudi government’s connections to the international community could lead to reform. Lina has called for the release of the reformers and has said, “I have no choice but to speak out and use my voice because my sister cannot. Our silence will not keep them safe.”

Where the Situation Stands

After approximately three years imprisoned, Saudi Arabia released al-Hathloul with limitations. Due to the kingdom’s human rights records, President Biden’s administration took stances that reflected a reconsideration of the relationship between the United States and Saudi Arabia. Al-Hathloul’s release has been perceived as a strategic diplomatic action by the Saudi government to relieve international pressures to improve conditions for women.

Today, improvements like the driving ban’s fall speak to the impact of al-Hathloul and other women like her. Though the situation remains challenging for al-Hathloul and her family, renewed international support gives hope for the future. As the fight for women’s rights continues, Saudi Arabia stands as a critical example of slow but deliberate change led by women.