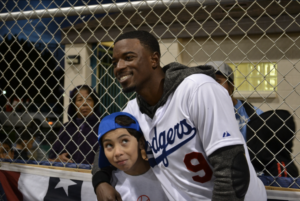 The athletes playing in Major League Baseball (MLB) are utilizing their fame and athletic talents to help those in need around the world. Some of these players grew up in countries with extreme poverty. Baseball was used as a means to find a better life and return to help their home countries with charities and relief efforts. Others have visited poverty-stricken countries and chose to make a difference in unique ways to increase poverty awareness. Here are three charitable MLB players who are giving back.

Baseball Players Giving Back Around the World

Considered one of the greatest pitchers of all time, Pedro Martinez was a dominant force on the mound throughout his 17-year Hall of Fame MLB career, which included a World Series win with the 2004 Boston Red Sox. Born in the Dominican Republic, Martinez saw first-hand the poverty that gripped his home country as he trained for life in baseball. When the coronavirus hit his home country, he took action and led the way with his organization, the Pedro Martinez Foundation, along with 40 other Dominican born MLB players. The group created a fund that has raised more than $550,000 for the relief efforts. This will pay for 5,000 food kits that last a total of two weeks each. It also will provide thirty-two thousand medical masks for doctors and nurses, 110,000 masks for citizens and 7,700 protective suits for medical personnel.

During a baseball game, Dee Gordon is best known for stealing bases. Throughout his decade-long career, he has stolen 330 bases, the most of any player in a 10-year period. The Seattle Mariners 2nd baseman has been using his talent for stealing bases to help increase poverty awareness to the hunger issues in the Ruhango district of Rwanda. Gordon has been associated with organizations such as Food for the Hungry, Strike Out Poverty and the Big League Impact Foundation for several years in order to help feed people in the Central African nation since 2019. As a charitable MLB player, every time he steals a base during a game there is a donation that he personally gives of $100 that goes toward one of these organizations to help feed the people of the Ruhango district. He has raised over $47,000 over the years to help impoverished nations all over the world including Rwanda.

In 2019, Carlos Carrasco received the Roberto Clemente Award for his efforts in helping out his community in his home country of Venezuela and around the world. The Roberto Clemente Award is given out once a year to the MLB player that shows extraordinary character, community involvement, philanthropy and positive contribution, both on and off the field. Carrasco, a 33-year-old pitcher for the Cleveland Indians, has been donating money and supplies to help those in Venezuela suffering from the current economic crisis that has gripped the nation for years. In 2019 he donated $300,000 to Casa Venezuela Cucuta, an organization out of Columbia that helps recent Venezuelan migrants fleeing the crisis. Carrasco has also sent toys, medical supplies and baseball equipment to the children living in Venezuela.

These three charitable MLB players show their dedication to increasing poverty awareness in countries that need it most. Through baseball, they have found fame and fortune. With that success, they have given back to communities all over the world by giving their time, money and efforts in creating a life for those without.