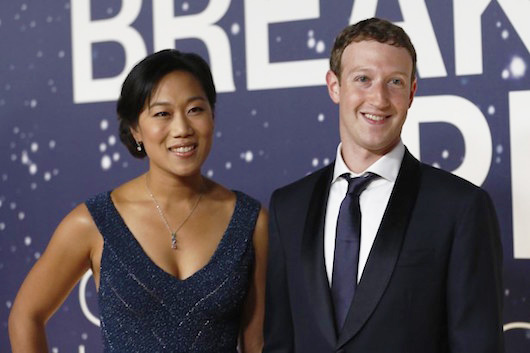 Mark Zuckerberg, co-founder and CEO of Facebook, isn’t a stranger to making large donations. He and his wife, Dr. Priscilla Chan, have already donated $1.6 billion to philanthropic causes.

But on Tuesday, Zuckerberg and Chan announced plans for something far greater.

In a Facebook post, the couple disclosed first the birth of their daughter Maxima, and then, more notably, a new project: the Chan Zuckerberg Initiative.

The new philanthropy is Zuckerberg’s pledge to donate 99 percent of his Facebook shares towards charitable donations over the course of his lifetime. It’s a stake that is currently valued at $45 billion.

According to Reuters, Zuckerberg said he intends to invest up to $1 billion of his shares each year over the next three years into the Initiative.

“Our initial areas of focus will be personalized learning, curing disease, connecting people and building strong communities,” wrote the couple. To date, however, they have not outlined specific organizations or causes they will fund.

Their drive in creating this Initiative came from the impending arrival of their new daughter. In a video, Zuckerberg stated, “Having this child has made us think about all of the things that should be improved in the world for her whole generation. The only way that we reach our full human potential is if we’re able to unlock the gifts of every person around the world.”

Overshadowing their intentions is the unique structure of the Initiative. Zuckerberg and Chan elected to create the Initiative as a limited liability company. That means, unlike a traditional charitable or philanthropic foundation, the Initiative can make political donations, lobby lawmakers, invest in businesses and recoup any profits from those investments.

According to Leslie Lenkowsky, professor of public affairs and philanthropy at Indiana University, “They are instead trying to achieve philanthropic purposes using a business model.”

Despite all this, Bill Gates, the wealthiest person in the world (with an estimated net worth of $85.2 billion according to the Bloomberg Billionaires Index) and his wife congratulated Zuckerberg and Chan.

“The example you’re setting today is an inspiration to us and the world,” they said. “We can be confident of this: Max and every child born today will grow up in a world that is better than the one we know now. As you say, ‘Seeds planted now will grow.’ Your work will bear fruit for many decades to come.”

Past donations made by Zuckerberg and Chan include a 2010 donation of $100 million for the improvement of Newark public schools, which met with some controversy. More recent donations include $20 million to EducationSuperHighway, which helps connect classrooms to the Internet, and a new acute care and trauma center at San Francisco General Hospital, where Chan works as a pediatrician.