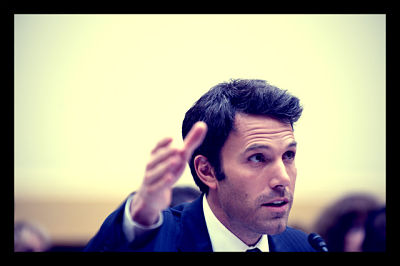 Ben Affleck may be famous for his role in movies such as Argo, The Town and Good Will Hunting, but nowadays he’s making an impact in a new role. Because of his philanthropic involvement in eastern Congo, Affleck went before the Senate Foreign Relations Committee to testify about the Congolese people and the need for U.S. involvement in the region. The hearing provided an opportunity for Affleck to draw increased media attention to the precarious human rights situation in the Democratic Republic of Congo and pressure lawmakers to do more to help.

Affleck first became involved in the Congo through his grant-making and advocacy organization, the East Congo Initiative (ECI). This organization seeks to increase investments in Congolese-led programs that create safe and sustainable communities. Additionally, ECI advocates for increased U.S. involvement in Congo while working against key problems such as rape and sexual violence as well as inadequate education and health resources for children. The East Congo Initiative also seeks to reintegrate former child soldiers back into their homes while leading community-level peace and reconciliation programs.

During his testimony, Affleck highlighted many of the struggles the Congolese people are enduring every day. For instance, Affleck cited UN reports that not only indicate that 2.9 million Congolese had been displaced internally, but also that 428,000 others have become refugees in neighboring countries. These people are being scattered throughout the region by the armed militia known as M23 that had previously taken over the capital of a northern Congolese province. A UN peacekeeping force recently coerced the M23 to surrender and sign a peace agreement. Affleck cited the UN group as evidence that “when the international community acts, and the Congolese government rises to the moment, these challenges are in fact solvable.”

Affleck finished his testimony by sharing a story about one of ECI’s partners, Theo Chocolate. An organic, fair-trade chocolate company, Theo imports more than 50% of its Chocolate from the DRC. Theo Chocolate’s business was connected to small folder farmers in the DRC by ECI and has helped support many of these small Congolese business operations. Through professionally directed investments, ECI was able to help spur economic development in the Congo and improve the lives of several Congolese people.

Through his charitable initiatives with ECI, Affleck is an example of how ordinary Americans can make a difference in influencing Congress and bring attention to the issues they care about. Affleck acknowledged, “I am, to state the obvious, not a Congo expert. I am an American working to do my part for a country and a people I believe in and care deeply about.” Through his actions, Affleck not only successfully drew the attention of the United States Senate to the plight of the Democratic Republic of the Congo, but he also gives hope for a better life to many impoverished people.

Physical Inactivity Taking a Toll in Middle East Credibility and Integrity: What’s At Stake for the CBP
Scroll to top