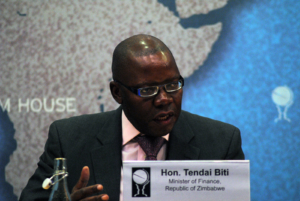 In a recent press conference, Zimbabwe Finance Minister Tendai Biti reported that there was only $217 left in the Zimbabwe government bank accounts. “Last week when we paid civil servants there was $217 [left] in government coffers,” said Biti. He went on to comment that some of the journalists present had healthier financial situations than Zimbabwe.

In an interview with the BBC the following day, Biti commented that the statement was taken out of context. “You journalists are mischievous and malicious – the point I was making was that the Zimbabwean government doesn’t have the funds to finance the election, to finance the referendum,” he said. “To dramatize the point, I simply made a passing reference metaphorically that when we paid civil servants last week on Thursday we were left with $217… but even the following day we had $30 million in our account.” The statement was made to send a message that the government was in a fragile state and unable to finance a referendum on a new constitution and an election. Zimbabwe would need nearly $200 million.

Zimbabwe’s economy had been in steady decline for more than a decade beginning with President Robert Mugabe’s seizure of white-owned farms that further injured the economy. The country had experienced a long history of hyperinflation aimed at addressing the problem of a declining economy. In 2008, inflation had hit 500 billion percent and the country had accrued massive debt. $104 million is now needed to have an election. The national budget for this year is $3.8 billion with a projection of 5% growth in the economy. “The government finances are in a paralysis state at the present moment,” Bitti said. “We are failing to meet our targets.” To address their financial situation, Zimbabwe will be reaching out to the international community for aid.