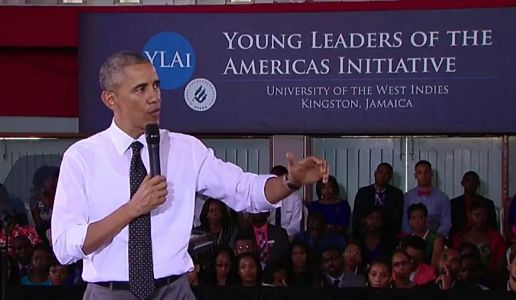 President Obama announces the launch of the Young Leaders of the Americas Initiative, or YLAI — to foster business, social, technological and entrepreneurial partnerships between youth in Latin America and the Caribbean and the United States — with the first round of participants beginning in 2016.

In a visit to Jamaica in April, President Obama has unveiled plans to increase opportunities for youth in the Latin America and Caribbean (LAC) region through the YLAI fellowship, which allows young men and women from LAC countries that have vested interests in business, social entrepreneurship and technology development, to join with their counterparts in the United States. These partnerships will build the skills of the Western Hemisphere’s emerging youth population as well as providing them with opportunities that may not be available in their home countries.

ShareAmerica said, “The fellowship will develop the knowledge, skills and networking capabilities of young leaders across the Western Hemisphere. Through the initiative, we will be able to significantly expand ties between the most promising entrepreneurs and civil society activists in Latin America and the Caribbean with their counterparts in the United States.”

According to The White House, the YLAI was designed particularly for the large youth population in the LAC region. Approximately 58 percent of the region’s population is under 35, and many LAC countries have a youth population of at least 70 percent. Unfortunately, many young people do not get to accomplish their dreams of becoming the next big entrepreneur or tech developer due to the prevalence of unemployment, limited access to jobs and education and poverty. These harsh realities often result in young people turning to illicit activities to produce income, which greatly reduces their chances of ever entering the workforce.

However, YLAI is working to address these issues by allowing a group of 250 ambitious young people to participate in a comprehensive program that will give them specialized training in their chosen field, either entrepreneurial or social/civil development. Similar to The Young Leaders of Africa Initiative launched in 2010, YLAI will also allow participants to connect to young people in the U.S with their same goals, and work to develop a stronger system of transnational ties.

The White House said, “The preponderance of the fellowships will take place at universities, incubators and non-governmental organizations across the United States, while follow-on exchanges will send Americans to Latin America and the Caribbean to continue the collaboration. YLAI fellows will receive ongoing support through a continuum of networking, mentorship, and investment opportunities.”

YLAI fellows will begin their fellowships with a comprehensive six-week training as well as becoming fully immersed with a social or business organization that will provide mentoring and networking opportunities. The fellowship will conclude with a summit in Washington D.C, where participants will continue to build on the connections that they have made throughout the fellowship.

Seventy million dollars has been committed to the YLAI and a pilot program has already been launched that includes a total of 24 participants who were selected by U.S embassies. Though the status of participants is unknown, such programs as the YLAI demonstrate the growing need to invest in the youth population of the world, so that they may contribute to the emerging world market.