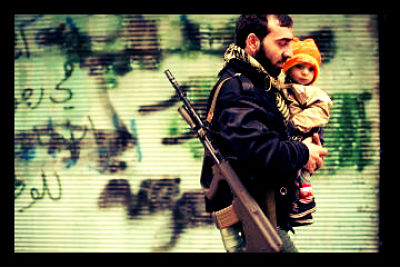 According to the CIA World Factbook, “unrest persists in 2013, and the death toll among Syrian Government forces, opposition forces and civilians has topped 100,000.”  It is important to show a bit of history before going into the current conflict of Syria because of the different rulers the country has had and how that has shaped its people and government today.  After World War I, Syria was a territory of France for a few years until granting it its independence in 1946.

In its first decades, it was politically unstable and multiple coups broke out, so it united with Egypt to create the United Arab Republic just to break apart a few years later.  Hafiz al-Asad seized power in a bloodless coup in 1970 and finally brought political stability to the country for the time being.

After the death of President al-Asad, his son, Bashar al-Asad, was elected to take over, but multiple anti-government protests broke out against him in 2011 and are still underway.  The protesters called for the removal of the restrictive Emergency Law that allowed people to be arrested without a charge.  They also wanted to remove corrupt local officials and to legalize political parties.  Since late 2011, international pressure has been put on the Asad regime as many nations have put sanctions against the regime.

Millions have been forced from their homes in Syria and have virtually no place to seek refuge from the conflict.  There are currently 9 million people that are displaced and literally need the aid of the United Nations or they will not be able to survive.  Around 50 people died of starvation and hunger-related illnesses because the government issued a blockade around their district of Yarmouk.

There are over 300 people in that district that are starving and all that the United Nations is able to get to those people is only 26 parcels of food.  Syrian authorities have killed about 11,000 detainees whose bodies showed signs of torture, beatings and extreme emaciation due to forced starving.

On January 21, the United States pledged $380 million for this year to the victims that are suffering the ruthless civil war.  They fear however, that the humanitarian assistance may not be permitted by the Syrian president, Asad.  Though the U.S. is the largest donor to the Syrian conflict, what it is offering is nothing compared to the $6.5 billion the U.N. plans on raising.

Since the war began, the U.S. has committed a total of $1.7 billion in humanitarian aid to those nine million displaced Syrian citizens, two million of which are believed to have fled to bordering countries.  Of the pledged $380 million from the U.S., half of it will be going to the U.N. programs for victims, especially those children who need education, health care and emotional counseling.  The U.S. will also be offering an extra $2.5 million to U.N. programs helping Syrian refugees in North Africa, Europe and Persian Gulf states.

Floods, Coffee and Disaster in Vietnam Strike Slows Down Platinum Production in Africa
Scroll to top