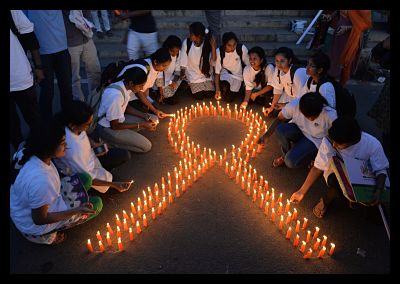 February 4 was World Cancer Day 2015, taking place under the tagline “Not beyond us.” The campaign had four key areas of focus: choosing healthy lives, delivering early detection, achieving treatment for all and maximizing quality of life.

There were 690 official events planned for World Cancer Day this year across the globe, ranging from a university awareness event in Israel to a World Cancer Day Walk in Ohio to a free cancer screening for women event in Lagos, Nigeria.

World Cancer Day is observed each year to “unite the world in the fight against the disease through raising awareness, educating the public and lobbying for change.”

Cancer is not just one disease but a collective name for many diseases; there are more than 100 types of cancer. Cancer is the term given to a disease characterized by the uncontrollable division of abnormal cells, which can spread throughout the body. There are five broad categories of cancer types: carcinoma, sarcoma, leukemia, lymphoma and melanoma and central nervous center cancers.

Worldwide, cancer is a leading cause of mortality with about 14 million cases and 8.2 million deaths in 2012. Globally, the number of new cancer cases is expected to rise almost 70 percent in the next 20 years. More than 60 percent of these new cases and 70 percent of cancer-related deaths occur in Africa, Asia and Latin America.

Risk factors for cancer include tobacco use, alcohol use, infection by Hepatitis B, sexually transmitted HPV-infection, urban air pollution, ionizing and nonionizing radiation, unhealthy diet, lack of physical activity, indoor smoke from use of solid fuels and being overweight or obese. By modifying or avoiding these risk factors, 30 percent of cancer deaths could be prevented.

Cancer detection and treatment are expensive and often unavailable to poor communities, especially in developing countries. Although fewer cancer cases occur in developing countries, there is a higher mortality rate. This shows that detection and treatment options are severely lacking. Because governments’ health budgets are usually constrained, difficult decisions have to be made about expenditures. Generally, infectious diseases get a higher percentage of the budget, leaving cancer and other non-communicable diseases to continue to wreak havoc.

Cancer is part of a larger group of diseases called non-communicable diseases, or NCDs. NCDs include cancer, heart disease, diabetes and chronic respiratory diseases and cannot be passed from one person to another directly. NCDs have been on the rise in developing countries but still receive little funding or treatment. The World Health Organization launched a campaign called the Global Action Plan for the Prevention and Control of Noncommunicable Diseases 2013 – 2020, which aims to reduce premature mortality caused by NCDs by 25 percent by 2025.