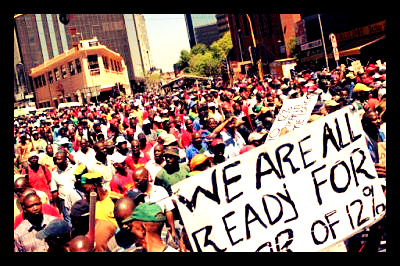 Union workers in the South Africa strike against top platinum companies are pushing for higher working wages for their labor.

The Association of Mineworkers and Construction Union (AMCU) stated that 70,000 of its members who work for the platinum industry are demanding a monthly pay of at least $1,200. This would allow them to earn more than twice of what they are currently making.

The companies of the platinum workers, however, argue that such demand is impossible. Anglo American Platinum, Impala Platinum and Lonmin Platinum all refuse to provide their workers with higher wages because the production cost for platinum is high while its demand is low.

The South Africa strike comes almost a couple years after the Marikana Massacre that took place at the Lonmin mine. In August 2012, police gunned down miners who they believed were posing a serious threat.

But according to a report by Sky News, the violence that occurred on that day appears to have nothing to do with what the police originally claimed to be self-defense. Footage of the massacre has been submitted to the Commission of Inquiry as potential evidence to help resolve the case. The film shows protesting miners walking slowly and peacefully while police units deployed in offensive positions.

Eventually, an officer shoots at the crowd and everyone begins to panic. One man does return fire; but this altercation was brief since the police on the other side had already begun gunning down the miners with automatic weapons.

President of the Republic of South Africa Jacob Zuma appointed the Commission to investigate what exactly happened at Lonmin mine. Human Rights Watch, a non-profit organization based in Washington, D.C., claims the Commission must be “independent, impartial, and investigates the underlying circumstances that led to the killing.”

Cameron Jacobs, South Africa director at Human Rights Watch said, “President Zuma has acted swiftly in deciding to establish a Commission of Inquiry, but an effective inquiry should include a comprehensive review of the background of the most recent violence, including the deaths of police at the hands of the miners.”

Moreover, HRW suggests the South African government should use its leadership and help resolve the continuing labor dispute between the platinum workers and their companies.

“Over the past couple of years, South Africa has witnessed a number of extremely violent strikes and protests partly due to the worsening poverty, increasing social inequality, low wages, and poor social service delivery,” the report argues.

By providing their workers with a higher wage, the platinum companies would not only put an end to the demonstrations, but also relieve many from poverty.