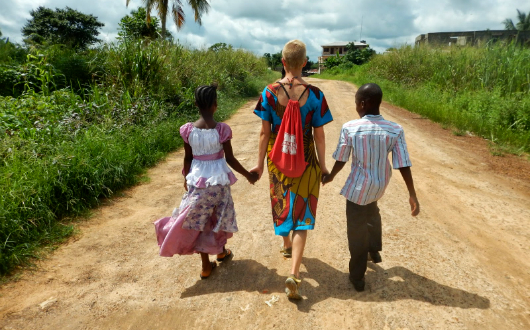 Liberia has seen some tumultuous times in the past few decades. Civil war ravaged the country in the 1990s leaving many citizens in extreme poverty and disrupting educational opportunities for children. Recently, Liberia was hit with Ebola and has suffered from the disease, including the Peace Corps, who needed to suspend their work for a time.

Yet, much good ground work has been done by the Liberian Peace Corps team to help the country overcome the ramifications of such dire events while the country and volunteers wait for the program to resume. The Peace Corps is also partnering with other entities to help rid the country of Ebola.

The Peace Corp first worked in Liberia from 1962-1990 helping with education, rural development, agriculture and health education. But volunteers left the country in 1990 because of the civil war that had broken out. In 2009, Peace Corps volunteers were asked by the Liberian president to return to the country. This time, volunteers focused on educational efforts in the country, specifically math and science at the secondary level.

The Liberian Peace Corps Educational Program defined their purpose as the following: “Liberian students, male and female, will gain access to personal, professional and academic opportunities through math and science education.”

They gave three main educational goals for their work in Liberia: Increase Student Success, Improve Teaching and Improve the School Community. In addition, the volunteers gave after school activity opportunities to the secondary students that have been broken down into four broad priorities: “1. Gender Equality and Women’s Empowerment, 2. Youth as Resources, 3. Stomp Out Malaria [and] 4. Food Security.” By using these supplemental goals as a guide, volunteers conducted after school tutoring, encouraged library development, organized various after school clubs, taught English and gave girls a specific opportunity to learn various life, vocational and/or math skills.

Peace Corps volunteers immerse themselves into the community, most volunteers committing two years to the Peace Corps while developing relationships with the locals.

Unfortunately, Liberia is one of the West African countries that has been hit with Ebola quite extensively.

The World Bank says that while in the last 10 years Liberia has seen great economic gains, “the outbreak of the Ebola Virus Disease (EVD) has threatened the peace and stability of the country.” The country’s gross domestic product growth has declined due to the economic repression that the country has experienced: “The epidemic is projected to have a significant impact on Liberia’s economy in terms of forgone output; higher fiscal deficits; rising prices; food security challenges, lower real household incomes and greater poverty.”

Ebola has affected Liberia so drastically that the Peace Corps was forced to remove their volunteers in 2014. But that hasn’t stopped the Peace Corps form working in West Africa with the efforts to stop the spread of Ebola.

The Centers for Disease Control, USAID, NGO partners and many more are working to improve conditions in those countries. The Peace Corps has printed educational material that has been distributed to volunteers, staff and communities in other African areas working to stop the spread of the disease. Volunteers in surrounding areas are also providing hand washing classes to the locals in the efforts to stop Ebola.

Even though Ebola has forced the program to be put on pause, the last few years of educational work has been impressive indeed. So much good has been done in the region that one can hope that local leaders will be able to stand in those communities that are suffering from Ebola. Hopefully soon, the efforts to rid West Africa from Ebola will prove effective and the program can restart. With such a strong reputation of good work in the country, the resolve looks good.