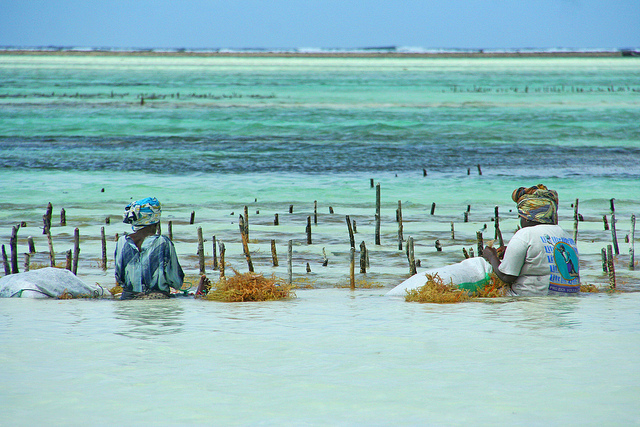 Investing in women and girls is a promising way to develop a global economy. One way to do that is via women’s entrepreneurship in developing nations.  A thriving and successful economy and an enlarged consumer base are just some of the benefits of increased female membership in business and leadership positions. Developing nations stand to face the most benefits from the inclusion of women in the business world.

“Women’s economic participation and their ownership and control of productive assets speeds up development, helps overcome poverty, reduces inequalities and improves children’s nutrition, health, and school attendance”, reports the Organisation for Economic Co-operation and Development (OECD). Women are more likely to devote more of their earnings back into their families and communities than their male counterparts, feeding money back into their local communities.

An example of this is with seaweed farming. Women dominate the seaweed farming industry in several developing nations. A study focusing on Africa, India, and South-East Asia found that women made up roughly 90 percent of seaweed farmers in Tanzania, representing leadership opportunities and a significant trade for women. Economic contributions from seaweed farming were observed improving the quality of life for families involved in the farming business, according to the report.

The “seaweed women” made important advances in the sustainability of the farming practice but the women also demonstrate dedication and patience as described by their male coworkers during the farming process. Community members also benefit from the local seaweed industry, the report claims.

A similar study finds that female farmer-entrepreneurs in Ghana have contributed to local poverty reduction. While the study did not directly report on the residual benefits, “It is reasonable to infer that improvements in entrepreneurial ventures lead to the creation of more jobs, which improves the local economy,” the report concedes.

Thailand, The Philippines, Botswana, Costa Rica, South Africa, Peru, Malaysia, Colombia, Romania and China are among some of the lower-middle and low-income economies scoring high on Mastercard’s Index of Women Entrepreneurs. Furthermore, despite unfavorable entrepreneurial conditions, women in Bangladesh, Uganda, Mexico and Vietnam are resolute and establishing successful businesses.

Though there are many success stories, increasing women’s access to financial services and easier accruement of credit would facilitate benefits intrinsic to women’s entrepreneurship in developing nations. Experts claim that women are an untapped resource essential to global economic growth and development.

The OECD argues that the inclusion of women’s voices in politics is essential to mitigate gender disparities and commence national benefits for nations collectively. Featuring more women’s entrepreneurship in developing nations also contributes to emerging markets and increases global trading partners. Advocating for women in more business positions is in the best interest of everyone. In the words of the all-wise Spice Girls, girl power.