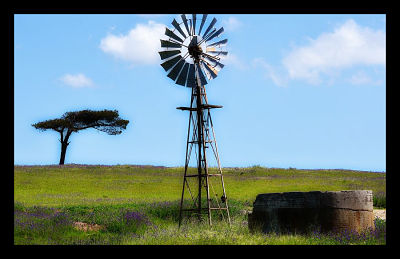 Over 1 billion people around the world, or 1 in 6, do not have reliable access to safe, clean water. The majority of the Earth is covered in water, however, 99% of it is not fit for consumption because it is salt water. The problem lies in the fact that desalination is time consuming, complicated, and very expensive. However, the people working with Wind4Water may have found a way around these problems.

Wind4Water is actually a set of technologies created by the Associated Wind Developers located in Plymouth, Massachusetts. The company is a renewable energy project developer that operates worldwide. The organization works as a strictly turn-key business, meaning that all projects can be sold to any buyer, rather than projects that are built to buyer specifications.

The project uses turbines to initiate the reverse-osmosis process. As the windmills turn, they force the impure water through a semipermeable filter. The salt and impurities are trapped in the filter while the water passes through. While the wind is blowing the system is set up to automatically purify extra water to be stored in large tanks in order to use natural energy to its full potential. If the wind does die down completely for a day, the system can switch to running off of grid electricity, if available, or off of its own on-site generators.

The technology is not new, but the idea is innovative and interesting. There are four basic facility sizes. The smallest of which will generate about 378,000 gallons of fresh water per day, serving about 15,000 people. The largest pre-engineered facility will make 1,514,394 gallons for about 115,000 people a day. Other options are available and larger sets of turbines can be used for an even greater effect.

The downfall of the program is the initial cost. The complete package comes with a varying number of wind turbines, the reverse-osmosis treatment facility, generators, storage tanks, proprietary controls and ancillary pumps. The smallest package with the least amount of turbines costs around $4 million. The most expensive is about $12 million. However, because the product mostly creates its own power, operating costs are minimal. Associated Wind Developers understands that the places most in need of this technology cannot afford it, and they have created a Donor Model where they use donations to pay the down payment of the system.

Project co-founder Bob Kuhn told WindPower Engineering, “We are excited about what this means for communities that have historically gone without affordable fresh water. With low-cost access to safe sources, communities can avoid many of the diseases associated with inadequate supply, liberate women and children from fetching water, and achieve a new level of economic and natural resource sustainability.”

The turbines create an impressive 750 kW of power, but are still able to be installed in places in remote locations with bad roads, limited infrastructure, and access only to small cranes. And, most importantly, they harness renewable energy to produce a life-source that many people are forced to go without.