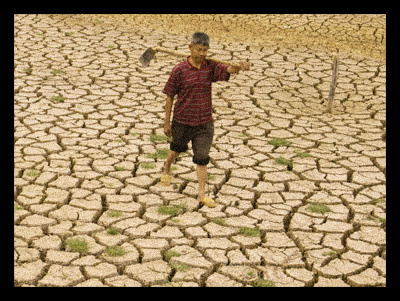 The world is changing in optimistic ways. Rates of malnutrition have halved in twenty years, infant mortality has halved in fifty years, and literacy rates have increased 33 percent in twenty-five years. The efforts of an international infrastructure founded on aid and education are paying off.

But there is still more progress yet to be made.

In 2013, global climate change is an irrefutable fact of life. Comparable to the important work of anti-poverty advocates is the work of environmentalists. As our world changes, experts have recommended that industrialized nations cut their carbon emissions greatly in order to stabilize the planet’s temperature and control some of the long-term implications of that shift.

These cuts are not only for developed nations, however, but also for those whose markets are still developing.

“Though global warming began with industrialized countries, it must end—if it is to end—through actions in developing ones,” writes The Economist. Particularly implicated are the economic giants of Asia – India and China, with The Economist citing that India, “accounted for 83 percent of the worldwide increase in carbon emissions in 2000-11,” with China claiming a quarter of the globe’s current carbon emissions.

Climate change is nothing new and has been happening steadily since the Industrial Revolution, with the past ten to twenty years seeing some of the fastest rates of change during the anthropocene. Members of industrialized nations have the privilege of heating, cooling and water upon demand that most of the world does not, and may not have noticed the shifts in seasonal weather patterns that have been occurring. Therefore, while developed nations have cultivated a culture of excess, life has only gotten harder for the lives of those in developing nations since the Industrial Revolution.

Now, however, officials have recognized that the facts are the facts and that we’re all in this together.

In a new book titled “Greenprint: A New Approach to Cooperation on Climate Change,” by Aaditya Mattoo and Arvind Subramanian, the authors raise the point of the responsibilities of developing markets to expand responsibly while developed markets must constrain themselves into sustainable practices.

“The trouble, as the authors admit, is that emissions cuts will also be costly for China and India. Messrs Mattoo and Subramanian estimate that if the two countries were to reduce emissions by 30 percent by 2020 (compared with doing nothing), their manufacturing output would fall by 6-7 percent and their manufactured exports by more than that. As still relatively poor countries, they are less able to bear the pain.”

While all of us bear the blame for the state of our planet, it’s the duty of governments to care about climate change and for both local and international communities to take action. Sustainable technologies, reducing the waste of valuable resources such as food and energy, and investing in sustaining the biodiversity we still have left are all great ways to start, and projects that we can all be a part of.

So, Borgen readers, this author’s advice? Pick up the phone and call your representatives. Make a difference and be part of a solution.