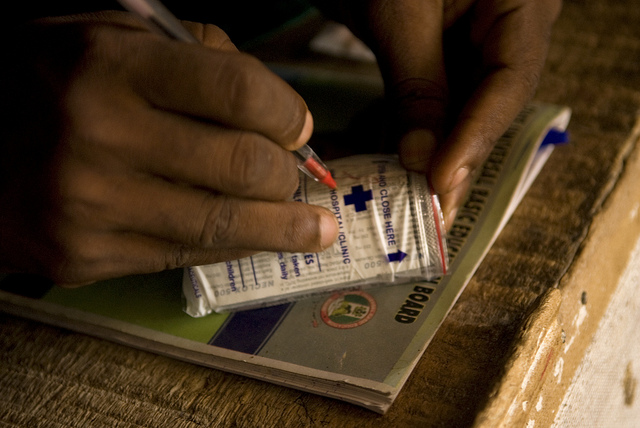 Nigeria is in the middle of a medical crisis. Having recently suffered from the massive 2016 Ebola outbreak and neighboring countries suffering from extreme cases of yellow fever, another serious disease remains. With over 6.9 million people in need of healthcare intervention, the WHO and its health sector partners are now tackling one of the biggest killers in Nigeria: malaria.

State health authorities credit malaria for nearly 50 percent of all deaths in Nigeria. Unfortunately, the WHO confirmed these grave statistics with a new surveillance system aimed at identifying specific risks.

In August 2016, the WHO began scaling up its emergency responsiveness by introducing the Early Warning Alert Response System (EWARS) in 56 healthcare facilities across Borno State in Nigeria. Now, over 160 sites are using this system. In short, EWARS is enabling on-the-ground data collection, using a series of technology in order to identify, track and report major public health concerns. This allows the WHO and Ministry of Health officials to respond much quicker to these concerns and with a more targeted method.

In using EWARS, WHO and the Ministry have identified malaria as the most common disease that persists in Nigeria. Subsequently, a clear prevention and treatment strategy has been formed and is continually being modified based on the EWARS data collection. The WHO is sending medicines and other supplies where they are most needed, and is also implementing preventative care measures along the way, by distributing mosquito bed nets.

The WHO’s plan to tackle the malaria epidemic in Nigeria started with “monthly rounds of age-targeted mass drug administration” – regardless of whether individuals were showing symptoms – in order to promptly address the urgency and the potential effects of the disease. This mass treatment and prevention strategy marked the WHO’s program as the first mass-scale delivery since the polio vaccine.

Fortunately, the WHO’s campaign is delivering results. Further, the WHO is confident that rates of malaria – and its associated mortality rates – will continue to decline. While this grand-scale treatment has been implemented, it only serves as a stop-gap measure. Whether a similar campaign will be needed in 2018 is yet to be determined, as the EWARS system and additional analysis on the state of the malaria epidemic in Nigeria are presently computing. The WHO’s hope is that if this campaign truly proves successful for Nigeria, it can be implemented in other countries as well, such as South Sudan.

The greatest obstacle to the success of the campaign to tackle malaria is simple: funding. Securing funds is vital to the program’s success in eradicating malaria in Nigeria. Currently, the WHO and its partners are relying on existing infrastructure to remain usable, despite the number of conflicts skirting the nation’s borders. Additionally, the annual intervention costs upwards of $2.5 million U.S. When it comes down to it, half of the deaths in Nigeria are caused by a preventable and treatable disease. There is no question that if Nigeria secures these funds and allows this campaign to go forward, progress will finally be made in tackling the serious disease that is malaria.