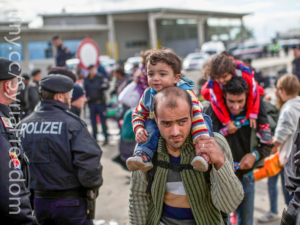 Two year old Hamid plays in the dust kicked up by his family as they make their way to yet another refugee camp in Iraq. The youngest in his Syrian family, Hamid has spent the past year moving from town to town as his family struggles to survive. He is one of over 750,000 Syrian children forced out of their country by a bloody civil war. Uprooted, these children roam as refugees in search of a place to call home.

These children are joined by approximately 45.2 million refugees living around the world today. In the past year, 23,000 people were forced out of their homes each day. That is 23,000 people a day fleeing from tragedies of war, persecution, environmental deterioration, and poverty. A large portion of these refugees end up in refugee camps where they remain for the long term—a permanent displacement which restricts their freedom of movement, offers minimal resources and spurs a cycle of poverty for millions.

At a time when refugee crises in Syria and elsewhere have demanded global attention, the United Nations High Commissioner for Refugees (UNHCR) has led an international effort to help rebuild the lives of millions displaced across the globe. Established in 1951, the UNHCR provided much-needed relief and support for refugees displaced during World War II. Today, the UNHCR maintains its legacy of effective aid strategies as it operates in over 125 countries around the world. Providing protection, assistance and durable solutions, as well as emergency relief to refugees, the UNHCR continues to, in the agency’s own words, “help the uprooted and stateless.”

Organizations like the USA for UNHCR work to raise awareness of and support for the UN refugee agency and its efforts in helping the world’s refugee population. Celebrities have also joined the cause, among them Khalid Hosseini, the award-winning author who volunteered with the agency in Afghanistan. Most notably, Angelina Jolie has visited refugee populations around the world since being appointed the Special Envoy to the UNHCR in April of 2012. Now it’s your turn. Get involved by donating, volunteering, spreading the word, and attending UNHCR events like the World Refugee Day held annually on June 20th.