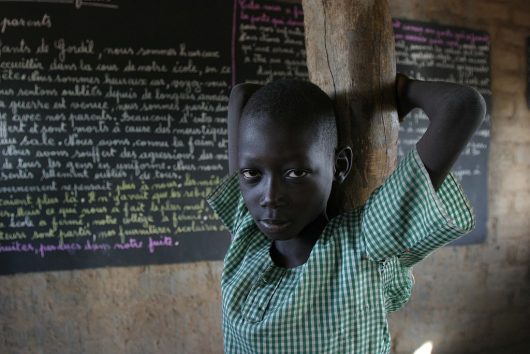 Benefits of Education as the Driving Force for Peace

In September 2017, the 72nd U.N. General Assembly took part in an event titled Making Education for Peace. U.N. members discussed the benefits of education as a security tool to fight against extremism and terrorism, concluding such threats could not be suppressed with security measures alone. Instead, comprehensive measures of preventing violent extremism are at the center of the U.N.’s sustainable development focus.

Comprehensive measures include investing in children’s futures through providing not just a stellar education to learn to read and write, but also a platform to teach peace, love, inclusion, tolerance and acceptance. For children growing up in situations of tension, teachings of global citizenship and human rights can deter the growth of extremist groups. The idea is to teach children about peace before terrorist groups can teach them about hate.

The U.N. Educational, Scientific and Cultural Organization’s literacy program in Afghanistan has already provided the skills and knowledge to 6 million men and women to resist violent extremism in their communities.

Along with creating a peaceful, more inclusive world, a country with a more educated workforce sees growth in the economy and production. Many studies have found a strong, positive association between the number of years a population spends in schools on average and gross domestic product.

Increased time spent on education also correlates with average wages earned. Obtaining an education opens professional pathways previously unavailable. Benefits of education include providing higher wages for the individual and their family. With only one additional year of schooling, wages have been shown to increase later in life by approximately 10 percent.

Increased wages lead to lower poverty rates, less hunger and stronger communities as extra funds go back to making communities better places to live and raise families. Education works to break the cycle of poverty, allowing people to provide better economic opportunities for their children and the next generation.

There also exists significant health benefits of education. Those who attend school have a higher chance of seeking medical treatment when needed than those without schooling. A potential contributor to this statistic could be the lack of widespread availability of health treatment centers.

In areas without proper schooling, there is little chance there will also be health clinics. Therefore, The Borgen Project and the U.N. Sustainable Development Goals list the building of schools and vaccine-equipped health clinics as two important steps for ending extreme poverty.

Education and well-being benefit each other. Better childhood health allows for a child to attend school with less interruption, leading to better schooling outcomes. Better schooling outcomes lead to improved health as an adult. Intergenerationally, the health and education of parents—mothers especially—increase the health and education of their children.

Disease prevention and health promotion are two other strong benefits of education. Intervention in primary levels of education empowers children to increase control over their lifelong health. The increased awareness in communities helps avoid negative health habits, conditions and diseases.

Education is a great equalizer as it works to:

5 Top Political Blogs: Where to Begin?Higher Education in Uzbekistan is Steadily Improving
Scroll to top