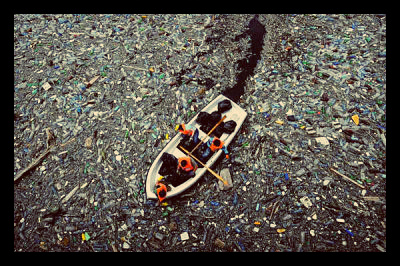 If the entire world lived like the average American, it would need 5 planets to provide enough resources to sustain that life.  Every day, the average person throws away 4 pounds of waste and 84% of that so called garbage should be recycled.  Most American families throw away about 88 pounds of plastic every year and as a result, the United States produces enough garbage daily that it would be equivalent to the weight of the entire Empire State Building.

The world actually produces enough waste that the Great Pacific Garbage Patch has been formed, which is a giant rotating vortex of debris and waste in the Pacific Ocean.  The area of this gargantuan patch of filth occupying the Pacific is equal to double the size of the entire United States of America and holds close to 100 million tons of waste.

At the same time, and being a causing factor, the human population has grown so much that it has actually grown more in the past 50 years than it did in the 4 million years before that.  The world growing is actually a very good thing and no one should try to stop it, but overpopulation can be a very serious issue because that would entail eventually reaching the carrying capacity for mankind, meaning that hundreds of thousands would starve.

The important thing to remember is that development and education is the best ways to combat overpopulation, not just letting people stay in extreme poverty.  The more foreign aid a country receives, the more that country can develop and educate its people in order to show them about contraceptives as well as introduce them to vaccines to keep their children healthy so that they don’t have the need for more children.

Many good-intentioned Americans would say something along the lines that they try their best on a daily basis to reduce their effect on the environment in whatever ways possible.  Unfortunately, they are not always presented with the best options and really need to be educated on what would be the best way to help the environment.

As countries around the world are developing, that means they are slowly creating more pollution and they need to be educated as well, but they can’t be unless there already is someone that can educate them or lead by example.

Many Americans don’t consider climate change when making political decisions, and it could take just that to actually combat climate change.  One of the best things that Americans can do is buy in bulk, that is of course if food won’t be wasted, so that they can conserve packaging.

As much as 50% of the waste in a person’s garbage is actually just packaging, so the less packaging that is bought means the less garbage produced.  It would only cost about $13 billion a year in order to satisfy the most basic food and sanitation requirements of the world (equivalent to what Americans and Europeans spend on perfume), it’s just a matter of awareness.

Closing The Gates On PovertyClimate Change: A New Corporate Interest
Scroll to top