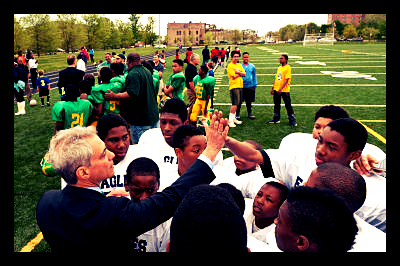 Ward Family Foundation, Inc. is a private foundation established in 1992 to improve the effectiveness of existing charities by putting successful business strategies into practice. Inspired by Catholic social teaching, which places significant importance on charity and human dignity, Ward Family Foundation recognizes the fundamental right of every human being to life, food, shelter, clothing, and medical care. All people are entitled to these everyday necessities, and this foundation firmly supports programs that offer such things to people in need.

With these ideals in mind, founder John L. Ward set out to focus on implementing proven business practices within charitable programs in order to increase success rates. The foundation refers to these strategies as benchmarking and best practices. According to their website, “benchmarking is a management tool to help companies remain competitive and become more effective. Best practices are those specific operating practices and philosophies that have been proven to increase effectiveness.”

Though they started out mainly working with homeless programs such as Safe Haven, the foundation has expanded to include food pantries. They plan to continue this expansion into other charitable areas such as crisis pregnancy centers, hospices, and soup kitchens. The same applies with charities; in the past, Ward Family Foundation has only focused on existing programs. In the future, however, they may establish new programs in order to support those causes not sufficiently served by existing programs.

The foundation’s homeless program best practices study identified 10 potential best practices for this area. Ward Family Foundation came to the conclusion that “the only objective measure of long term effectiveness of homeless programs is the success rate of its graduates in the years subsequent to departure from the program.” Only several of the programs that were studied remained in contact with graduates of their programs (for a period lasting at least six months up to one full year).

To further assist homeless programs in improving their effectiveness and the development of potential best practices, Ward Family Foundation has begun five pilot implementation projects. They include a scholarship program meant for aspiring college students, a job training program, a home ownership program, an enhanced aftercare program (one that keeps in contact with shelter graduates up to two years after they leave), and a tracking database project.

For more information on this organization and their mission to fuse modern business and charity work, go to their website at http://www.wardfamilyfoundation.org.