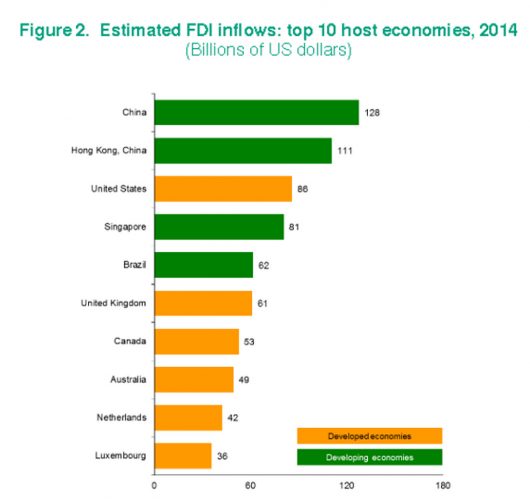 When one hears the phrase “foreign aid,” he or she often assumes it refers to bilateral aid, humanitarian assistance or military intervention. Foreign direct investment (FDI) is perhaps the unsung hero of foreign aid, with evidence of the benefits it brings to developing, or host, nations globally. As such, the notion of using FDI to combat poverty is one that has garnered significant support from many global development organizations.

While not the sole driver, sustainable growth is clearly essential to poverty reduction. Indeed, it is suggested that even a 10% increase in the average income of a nation can reduce poverty rates by up to 30%. FDI provides several benefits unlike those of other types of aid that can enable such growth to take place.

For many of the worlds’ poor, the possibility of gainful employment is of tremendous value. As FDI increases growth, this growth enables job generation, providing a way out of poverty for many people in host countries. In Bangladesh, for instance, the influx of FDI in the garment sector has enabled new opportunities for local suppliers, creating economic opportunities for many who previously were limited.

A further benefit to hosting nations using FDI to combat poverty is the potential knowledge transfers FDI enables. By training workers in the host countries, FDI helps in the development of human capital, enabling an increase in skilled personnel. Transfer of technology produces similar results which, when combined with new knowledge, further promote growth in the host country.

The growth of China from 1980 to 2010 is perhaps the most obvious example of the ways in which FDI can truly benefit an economy and simultaneously help relieve poverty. Now an economic titan, a large part of China’s success is due to embracing FDI and the benefits it entails. Despite only accounting for 10% of the nation’s workforce, foreign enterprises that had entered the market accounted for over 22% of industrial profits and 30% of industrial outputs in 2010. A pioneer in attracting FDI, China has reaped the benefits, experiencing growth at a level of around 10% for most of that time. This success is not limited to China but has been experienced at high levels by countries such as India, Brazil and Turkey.

Whether directly or indirectly, using FDI to combat poverty has proven valuable. By increasing the attractiveness of investment in their market, many countries have been able to reduce the number of their population living in poverty. For other developing countries who are seeking to tackle the same problem, attracting inflows of FDI may prove to be of immense value.